YEVVO is an iOS app that enables you to tell your story through live video, and today announced it raised $3.7 million in Series A funding.

Led by Aleph Capital with investment from Entrée Capital, the service has raised over $4 million to date.

From CEO and Co-Founder Ben Rubin:

“The next generation of social is not about sharing, but rather taking part. With YEVVO, people enjoy the ability to immediately go live with their friends and viewers. The audience changes the reality as the story unfolds in real time. With one click, you can bring your friends and family into your reality.”

We were able to get an exclusive interview with Rubin on what YEVVO is all about, and here’s what he had to say:

What was the inspiration for YEVVO?

Trying to create honesty in our social communication. Things are so over-filtered, and probably too thought out that we stopped being ourselves digitally and we started to be the story we created of ourselves. Connecting your audience to a certain moment in a way that actually empowers them to change your reality was the guiding inspiration behind YEVVO.

The future of social is no longer about sharing but rather letting the world take part. When you’re watching something that’s recorded or looking at a photo that’s been posted, or even reading someone’s status, there is raw emotion that took place during that actual moment that you missed.

Our goal with YEVVO is to eliminate the need to capture and then recreate life experiences after the fact, and enable people to experience and participate in life’s moments in real-time, shaping them with others as they happen.

How is YEVVO different from services such as Ustream?

YEVVO was created to be a medium that powers unfiltered, real time participation among individuals. YEVVO is also a community — it’s responsive and real. Platforms like Ustream are a tool for broadcasting – in essence an enterprise solution. As a point of comparison, Picasa is a tool for images while Instagram is a community.

Who is your target audience?

Whether you feel like being an “actor” or a “director,” YEVVO is for people that want to create their story with others through streaming mobile video, and for those who want to take part in, contribute to and shape these experiences together in real time. YEVVO is also for people that want to embrace the intimacy of live video and the unfiltered experience and connection of mobile-to-mobile interaction.

What we’re seeing is interesting behavior among teens across the country. YEVVO has become a way for them to socialize and express their creativity, thoughts and feelings. What’s really interesting is the validation that the community gives to the streamers in real time and how they shape the story as it evolves through live interaction and feedback.

What’s your biggest goals in terms of what you’d like to see people get out of YEVVO?

Until now, people have become accustomed to capturing life’s moments and then recreating them later online for commentary from others. YEVVO is built to create your story in real time, invite others to take part in it and contribute as it unfolds. Our goal is to help people embrace the power of real time participation, and how a medium like YEVVO can drive a deeper and more authentic connection that leads to a richer experience.

As one example, a director in Brooklyn uses YEVVO to invite people behind-the-scenes as he makes his movie. It’s raw and unpredictable. This use evolves the movie-making process from simply being a consumption behavior, or something that people might never normally see, to one that’s participatory. You can now help “direct” that experience and “be there” as it happens.

We want YEVVO to be the medium that people rely upon to invite others to help shape their real time experiences. We want to enable simultaneous living and communication. 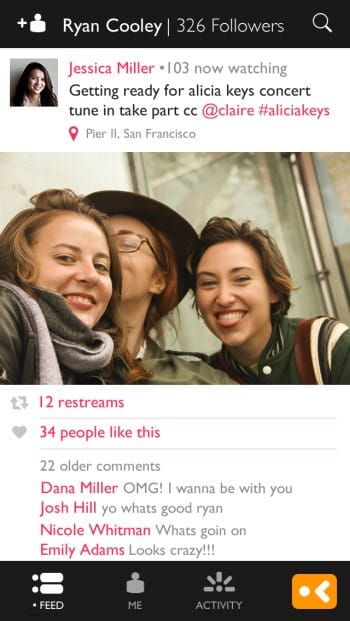 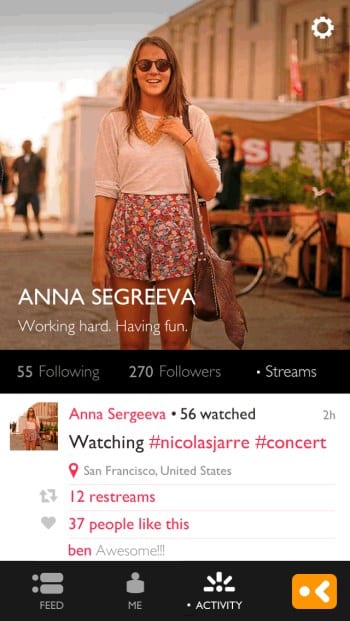