Once again, some guy has said some dumb thing on Twitter, is experiencing consequences of some kind, and the issue is getting national attention because “freedom of speech” which doesn’t really work that way (but we covered that here).

Kent State wrestler Sam Wheeler got into a Twitter spat over Missouri defensive lineman Michael Sam, who just came out as a gay man. Wheeler is kind of tired of all the media coverage “that fag from mizzou” is getting, shared those feels on Twitter, and it devolved from there: 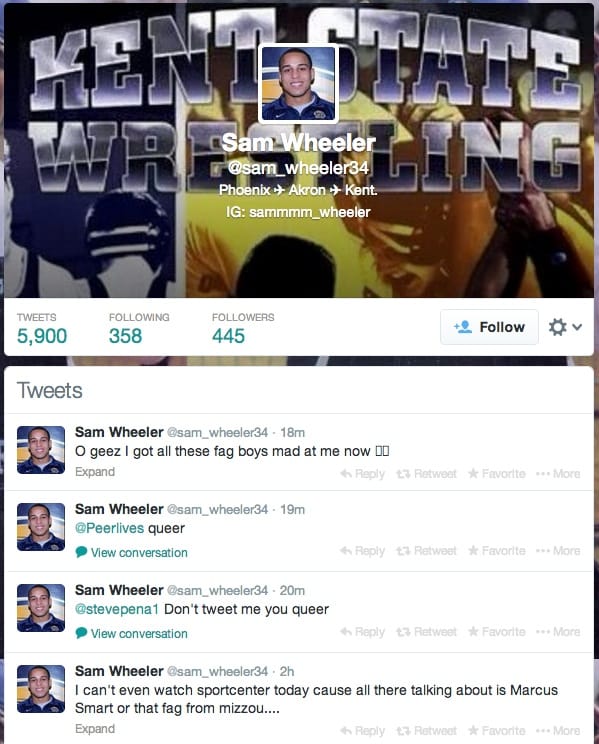 He was suspended indefinitely.

Since Wheeler’s suspension is a free speech issue, some are sticking up for his comments on Twitter:

Others are taking it as an opportunity to revisit the meaning of their constitutional rights:

Can anyone that knows more about 1st amendment explain why the sam wheeler suspension by kent state is OK?

Some have been more than happy to explain that the Constitution, while admittedly amazeballs, doesn’t really apply to Wheeler’s dilemma:

You are accountable for what you say in social media. Kent State wrestler suspended indefinitely for tweets: https://t.co/c6Rz5AXgPe

We’ll let you know if a real constitutional lawyer takes on Wheeler’s case. In the meantime, his Twitter account has been deleted.