Shia LaBeouf Wears Paper Bag, Says I Am Not Famous...

Shia LaBeouf wore a paper bag over his head on the red carpet this weekend. Why? Is it because he’s crazy. Well, maybe. But the real reason is that Shia Labeouf is tired of being famous.

The actor has been involved in bizarre incident after bizarre incident for the last several months. In fact, he has stuck his foot in his mouth so many times recently that the only way to salvage his career may be stepping back from the spotlight altogether.

But Shia has a strange way of stepping away from the spotlight. Instead of, you know, closing down his social media accounts and avoiding major public gatherings, Shia has decided to scream at the top of his lungs that people shouldn’t pay attention to him. 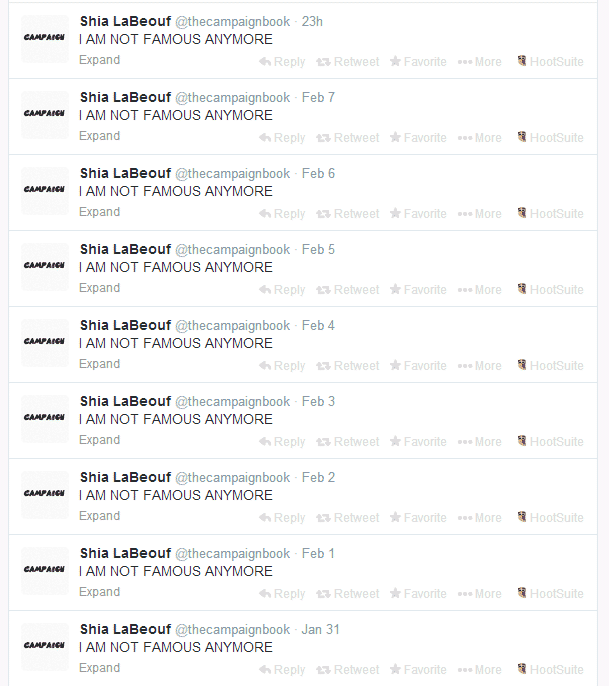 Last night, Shia took his desperate plea for anonymity by wearing a paper bag on his head during the premiere of Nymphomaniac at the Berlin Film Festival.

Seriously, Shia LaBeouf wore a bag on his head.

PAY NO ATTENTION TO ME WITH THIS BAG ON MY HEAD MT @BBCNewsEnts: Shia LaBeouf on the Berlin Film Festival red carpet. pic.twitter.com/K4LVwG9wlY

Now, we can all make fun of Shia LaBeouf for his childish antics. We could call him a freak or a weirdo or spoiled Hollywood brat. But honestly, the actor’s behavior is a little frightening.

Shia, please, take the bag off and go into hiding. Take a few months, years, and get your head together. And please, if you don’t want attention then stop stepping into the spotlight.