Irina Rodnina is one of Russia’s most decorated Olympians. Unfortunately, she also seems to be one of the country’s most controversial athletes. A racist tweet sent by Rodnina in 2013 is causing headaches for the organizers of the 2014 Sochi Olympics.

A 2013 tweet is back in the spotlight after Rodnina lit the Olympic flame at the start of the Sochi Winter Games. 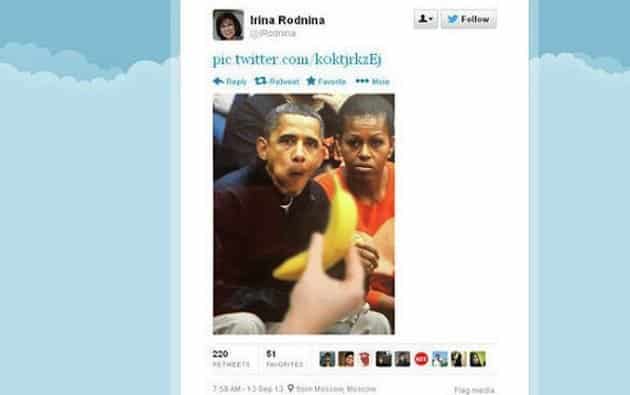 Rodnina deleted the tweet after people called her out for racism but the athlete never issued an apology. According to Yahoo Sports, Irina responded to the controversy by saying: “Freedom of speech is freedom of speech.”

The issue was brought back to the forefront this week when Rodnina lit the Olympic flame.

Some claimed that the Olympian was chosen as the torchbearer for political reasons but Games chief Dmitry Chernyshenko said that Irana earned her place for her accomplishments in her sport.

Chernyshenko said: “Irina Rodnina is from the club of three-times gold medallists and one of the most respected in the world … The Olympic Games are not about politics.”

The Sochi Olympics have not gotten off to a smooth start. Before the games began, several people tweeted about #SochiProblems. At the Opening Ceremony, a glitch caused one of the Olympic rings to get tuck in the snowflake position. And now, thanks to a racist tweet from Irina Rodnina, several people believe that Putin is using the games to make a political statement.