Are you ready to auto sync the photos taken from your Google Android phone to your Facebook account? The social network is currently working to make those sync’d shots a possibility.

Known as “Photo Syncing” the platform syncs the photos and then stores them privately. Users then choose which photos appear on their Facebook profiles, ensuring that your more intimate or embarrassing photos do not sync and auto display.

A similar feature is already available for Google+ users.

The feature is already being tested for select Google Android Facebook users.

One big positive for the application is that it will only sync if your battery level is high enough to allow for syncing and if your settings allow for that particular capability. 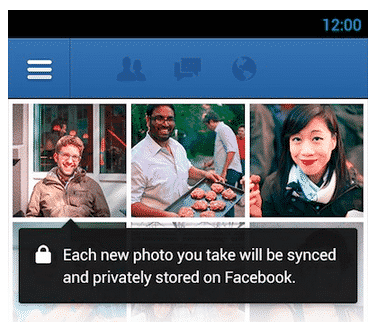 One of the nicest features is the ability to choose when photos are sync’d. For example you can choose to only sync photos when connected to Wi-Fi networks to avoid data overages. If users choose to sync over data networks the photos are uploaded at a smaller image size around 100k.

To check for the feature on your Android phone tap “Photos” on your Timeline withing the Facebook Android app and then see if “Photo Syncing” shows up as an option.

Will you be taking advantage of Facebook photo syncing for Google Android?