The Oreo Strategy: Brands To Spam Twitter This Super Bowl

Oreo won the brand battle of last year’s Super Bowl not with a clever commercial, but with a single, well-timed tweet.

There’s a reason for that old cliche about watching the Super Bowl “for the commercials.” Brands pay out millions in advertising for the big game every year. It’s the Times Square of televised marketing opportunities. But the whole Super Bowl marketing model was turned on its head last year when the power went out, delaying the San Francisco 49ers and Baltimore Ravens game for an awkward 30 minutes.

Oreo took advantage of the silence with a simple, clever tweet: 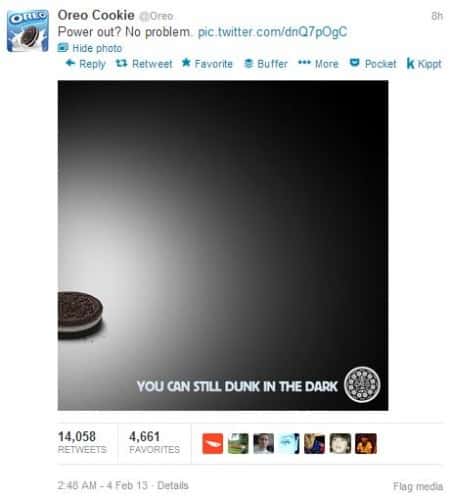 The message was retweeted and favorited and liked (on Facebook) millions of times. Best of all, it cost Oreo nothing.

So, in the words of TIME’s Brad Tuttle, “expect lots of copycats this year.”

Both Volkswagen and the marketing firm FleishmanHillard have already said that real-time marketing and reacting to the game itself online are huge parts of their respective Super Bowl ad strategies this year. The words “command center” and “war room” were used. They’re for real about this.

This kind of planning isn’t limited to the Super Bowl, either. Quick-thinking brands have successfully driven up engagement using the “Oreo strategy” during other televised events like this year’s Grammy Awards (Arby’s and Pharrell’s hat) and Carrie Underwood’s Sound of Music special (DiGiorno live-tweeted the whole thing).

The difference is, social media engagement of this kind is moving from happy accident/bored-social-media-marketer-playing-with-trends, and into actual industry strategy. The fear is that unique, impromptu events like Oreo’s Super Bowl tweet last year will fall by the wayside as countless brands drown each other out trying to out-fox one another for your retweets.