Ever since Raw commentator and wrestler Jerry Lawler suffered a heart attack on air, World Wrestling Entertainment has been keeping fans updated on his condition with posts to Facebook, Twitter, and Google+.

The WWE’s use of social media has provided relief for Lawler’s fans, and has demonstrated once again the ability of sports and entertainment brands to circulate information through social networking directly without waiting for media outlets to do their reporting for them.

“Jerry ‘The King’ Lawler is a beloved member of the WWE family and a fan favorite, as evidenced by the outpouring of support,” WWE told Mashable.

“It is no surprise that fans are using social media to send their messages of support,” WWE adds. “This is a reflection of the world we live in today and the power of the social media to connect people.”

Here’s a run-down of the WWE’s social media engagement and usage regarding Jerry Lawler’s condition:

Update from @wwe: “As of this morning, Jerry “The King” Lawler is in a cardiac care unit and all his vital signs are stable…”

UPDATE: “…WWE will provide additional information as it becomes available. We continue to wish Jerry all the best for a full recovery.” 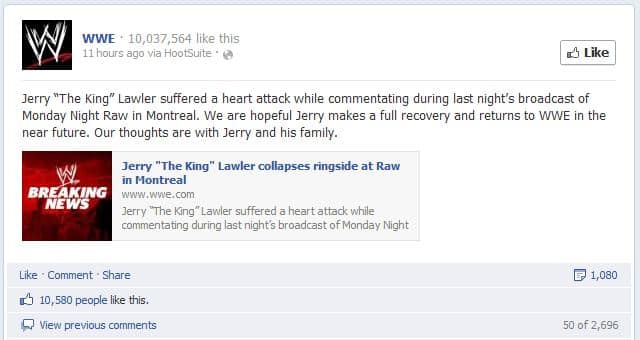 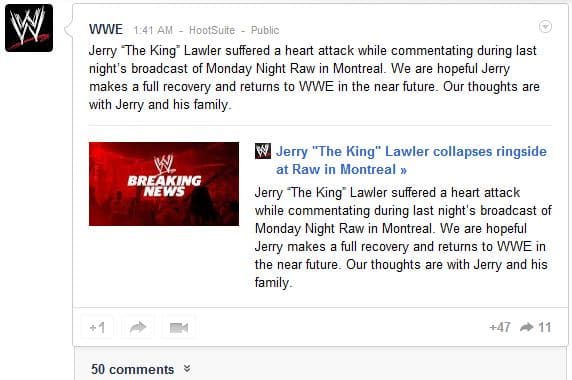 Have you been following Jerry Lawler’s condition through social media?