Madonna: Forgive Me For Using N-Word

If Madonna calls you the n-word, don’t be offended. It just means that she loves you…

The singer was criticized this weekend after using a racial slur to refer to her white son Rocco on Instagram.

The message has been deleted from her Instagram account but it is still being circulated around the internet. Madonna writes: No one messes with dirty soap! Mama said knock you out! #disnig**a” 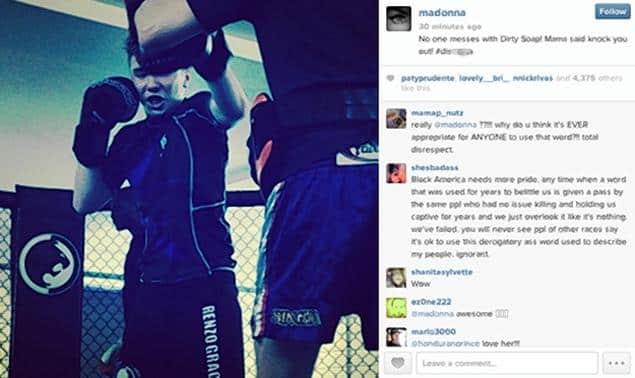 After receiving a few angry comments, the singer decided to delete the post and re-upload the image with a new message. This time Madonna wrote: “Ok let me start this again. #get off of my dick haters!”

That, of course, just stirred up some more anger.

Madonna eventually decided that it would be best to apologize. The singer issued a statement this morning saying that she didn’t intend the word as a slur. The singer said that it was a “term of endearment” and insisted that she was not a racist.

Madonna said: “I am sorry if I offended anyone with my use of the N-word on Instagram … It was not meant as a racial slur … I am not a racist. There’s no way to defend the use of the word. It was all about intention … it was used as a term of endearment toward my son who is white. I appreciate that it’s a provocative word and I apologize if it gave people the wrong impression. Forgive me.”

Madonnaalso addressed the issue on Instagram, writing: “MY job is to inspire and bring people together . My message has always been about tolerance and non judgement. The last thing I want to do is bring chaos or cause separation in anyway. #revolutionoflove”

This isn’t the first time that Madonna has caused controversy with her Instagram account. Earlier this month the singer was criticized for posting a photo of her underage son holding a bottle of liquor. The singer had a similar response to that controversy, telling her haters to get off her d*ck and relax because the boys weren’t actually drinking.