LinkedIn debuted a new notification feature, though it hardly groundbreaking. The new feature takes its cues from another social network you may have heard of – Facebook.

Though cribbing Facebook is hardly a negative, as LinkedIn users are likely already familiar with the social network’s notification system, the professional social network has implemented a new notifications feature which lets you know, in real time, when someone likes something you shared on LinkedIn, looks at your profile, accepts an invitation, and other things. 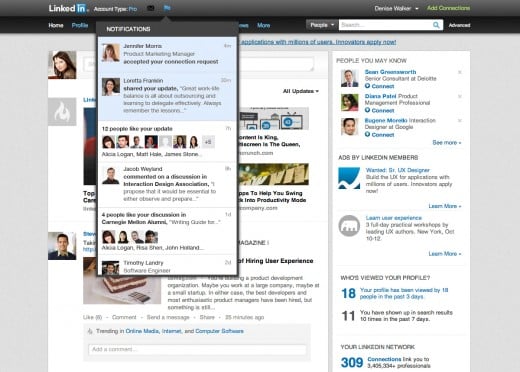 It’s fairly similar to Facebook’s notification system, notifying you with a little flag at the top of your screen. It also features a familiar-looking Inbox envelope icon. When a new comment, like, or accepted connection request is caught by the system, a red circle appears to let you know that you have a new notification.

“This new feature is all part of our ongoing effort to make it easier to keep engaging discussions going with your network,” the company said in an announcement.

Right now, the feature is restricted to the browser-based version of LinkedIn, but notifications will soon arrive for mobile devices, like Android, iPhone and the iPad. The feature rolled out today, but it might be a few weeks before you see it for yourself.