Jelly, a social search app launched last week from the mind of Twitter Co-Founder Biz Stone, talked about how its first week went in a new blog post.

Two days after launching, the app was added to Apple’s list of “Best New Apps,” and it also appeared under “Editor’s Choice” in the App Store.

While the massive buzz is a good thing, Jelly isn’t blinded by initial large numbers:

However, an amazing spike like this also means that our numbers will drop dramatically. Jelly will fall off the top free apps charts, reporters will stop writing about us, and we’ll begin the long, slow, organic growth climb that every startup faces. We’ve just arrived at the starting line of our long haul.

Jelly has also attracted attention from such big names as Facebook CEO Mark Zuckerberg who used the app to ask about a spider in his bathroom: 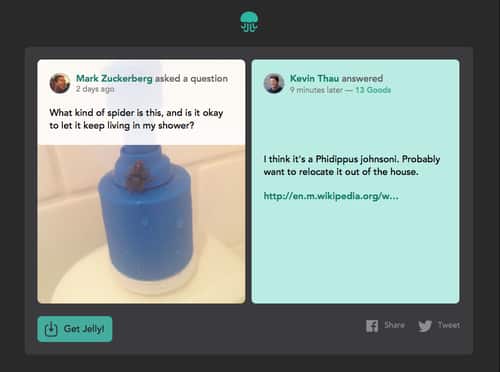