Bikini Bridge Photos: The Hoax That Became A Trend [Hoaxed]

You might have seen/heard about this “bikini bridge” controversy that’s blowing up on social media, but if you’re new to the table, don’t you worry your pretty little head. This has nothing to do with Chris Christie. Also, it’s a major hoax.

“Bikini bridge” started off as just the latest body image thing, and basically existed as an excuse for skinny girls to show off their bodies like so:

It caused a fresh minute of social anger, and most of you reading this probably saw a macro or two on one of your news feeds. My first exposure to the phenomenon came from my own father, who admirably used the meme to encourage women not to fret the physical stuff and to eat as many cheeseburgers as they wanted.

But it was all for naught!

Unlike last year’s very real “thigh gap” controversy, the “bikini bridge” and its initial backlash were designed and executed by the same person(s) on 4chan. 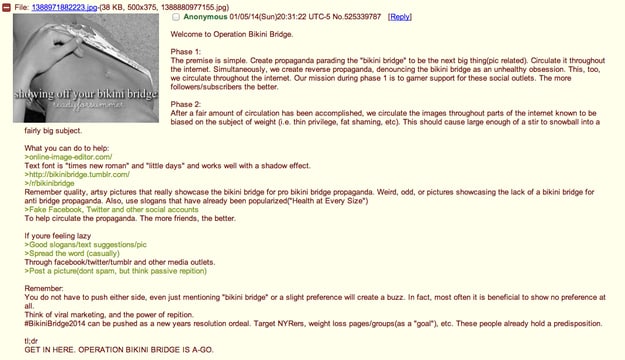 So, in summation, the “bikini bridge” thing is a hoax that became a trend and it has nothing to do with Chris Christie, so stop using #bridgegate as a hashtag on posts of girls in bikinis. Unless you’re trying to make a joke.