Snapchat is extremely popular among teens and young adults, and a new app called Confide looks to offer similar functionality for the business crowd.

However, what makes it different from Snapchat is that recipients drag their finger along text in order to reveal it as they go. Once an entire message is read, it’s automatically deleted. 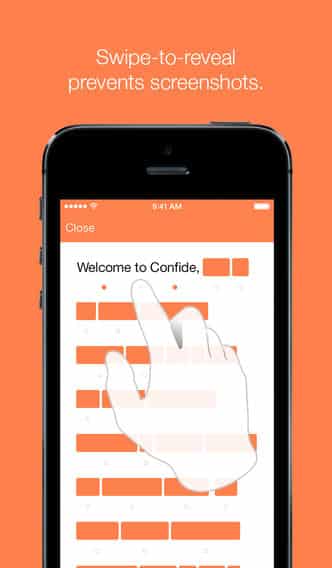 While it may sound like a strange concept, it’s actually a great idea for one big reason: screenshots. Since text is only revealed as you swipe, the recipient can’t take a screenshot of the entire message.

Confide has also built-in the ability to detect if a screenshot was taken, alerting you if one was, and you’ll receive notifications when your messages are read.

Created by Howard Lerman and former AOL executive Jon Brod, here’s how they came up with idea:

Mr. Lerman — who’s CEO of Yext, a local information software company — had asked Mr. Brod for a reference for a former AOL employee. Hesitant to write about personnel matters via email and thus create a permanent record, Mr. Brod tried to call him but got his voicemail. They didn’t end up finding time to speak until six days had passed. “We said, ‘Wow, that’s incredibly inefficient. There’s clearly a problem here,'” Mr. Brod said.

Confide only works with text-based messages, so if you’re looking to send some risque photos, you’re best to just stick with Snapchat.