Twitter is apparently just dying to get this show called “2014’s most embarrassing tweets” on the road. In celebration of the new year, the social network’s finest community pundits descended upon a relative unknown to point out, by virtue of mob force, how misguided the poor girl was for wishing the earth a happy 2014th birthday.

Brain toot or harmless joke, we’re not sure. What we do know is that Twitter spotted injustice and got stupid pissed about it. Within a mere couple of hours, @safiyyahn had become 2014’s Justine Sacco.

Luckily, $afiyyah had a pretty decent sense of humor about it and re-tweeted the “greatest hits” among the deluge of criticism she received.

Dumbass of the year already pic.twitter.com/EhhrehePSH

Pro-tip: Never take anything said by someone with the self-applied sobriquet “White Chocolate” seriously. Never ever.

“@safiyyahn: this beautiful earth is now officially 2014 years old, amazing” TAKE THAT $ OUT OF UR NAME U DUMB U DONT DESERVE MONEY

The real lesson here is “make sure you’re smarter than the person you’re trying to troll,” because if you ask me, $afiyyah walked away from this one pretty spotless. With 12,000 retweets and 7,500 favorites, I think it’s safe to say that $afiyyah is our first official Twitter troll of 2014.

so far i have seen stop mexican girls, stop black girls, and stop indian girls hahahah YOURE ALL WRONG #RACIALLYAMBIGUOUS 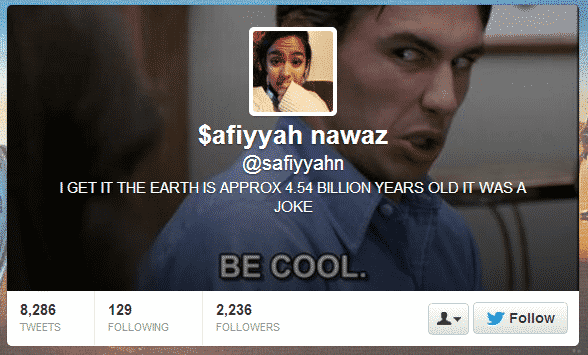