RIP Sharkeisha. We hardly knew ye… A Sharkeisha death hoax has been circulating on Twitter this week. Thankfully, it doesn’t appear like the story is true.

The rumor started on the website Huzlers earlier this week. Huzlers writes that Sharkeisha Thompson was the victim of a drive by shooting.

The website writes: “Houston County Coroner Paul Harris, in a statement today, said 16-year-old Sharkeisha Thompson was pronounced dead shortly after arriving at a Fifth Ward hospital early Friday at about 3:30 am. Harris said a 18-year-old juvenile was also treated for gunshot wounds, but his injuries were not considered life threatening.”

The story went viral and soon people were morning the loss of their most recent viral star. Sharkeisha, if you don’t remember, became an internet meme earlier this month after getting a fight video was posted online.

RIP to Sharkeisha… Only 16 years old…

Shortly after the Huzlers story went viral an image was posted to the “Queen Sharkeisha” Twitter account that showed a young woman chained to a hospital bed. The photo seemingly disproved the Sharkeisha death hoax but it really just added more confusion to the situation. 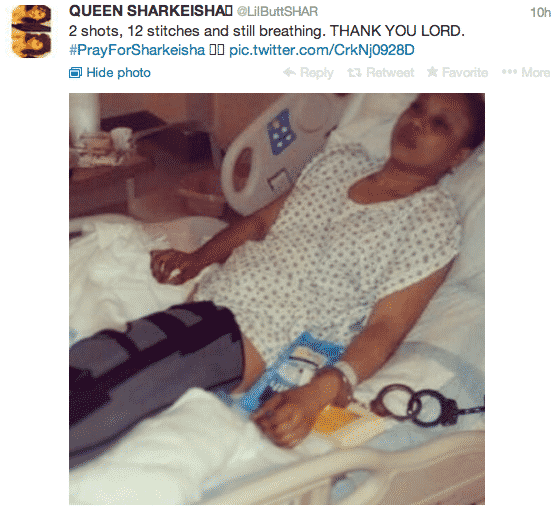 So why did Sharkeisha claim that she was shot twice? My guess is that the 16-year-old read the Sharkeisha death hoax story on Huzlers and wanted to p lay along. She posted the photo, which seemingly confirmed some of the facts of the Huzlers story, but changed that little detail about being dead.

Anyway, it looks like the entire thing is fake and Sharkeisha will live to fight another day.