Cracker Barrel just wants its customers to be happy. The store announced this weekend that it would be removing all Duck Dynasty merchandise from its shelves due to Phil Robertson’s anti-gay remarks. That may have been a bad decision.

Shortly after making the announcement the store’s Facebook page was flooded with angry comments.

Cracker Barrel writes: Cracker Barrel’s mission is Pleasing People. We operate within the ideals of fairness, mutual respect and equal treatment of all people. These ideals are the core of our corporate culture … We removed selected products which we were concerned might offend some of our guests while we evaluate the situation.”

The Facebook post attracted thousands of comments. Most of those comments came from Phil Robertson supporters who informed Cracker Barrel that they would be losing customers if they stuck by their decision. 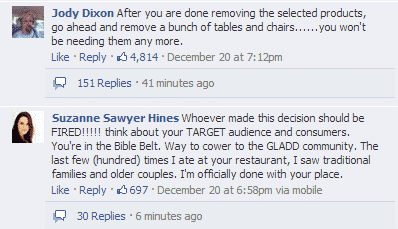 That’s just two of more than 30,000 comments that were left on the post. Another former Cracker Barrel customer writes: “Dining at CB on New Year’s Eve has been a tradition for my family for over 10 years. Unless CB publically apologizes to Phil Robertson and replaces ALL Duck Commander merchandise, we will be dining elsewhere this December 31st … probably Chick-Fil-A.”

Another adds: “From reading all the posts, I am pretty darn sure your core customers have Christian values do not give a darn about political correctness. Get a backbone CB listen to what your customers want.”

After reading through thousands of comments, the team at Cracker Barrel decided that it was probably best for business to put the Duck Dynasty products back on its shelves. The company posted an open letter to its customers on Facebook apologizing for its initial decision to remove Duck Dynasty merchandise. 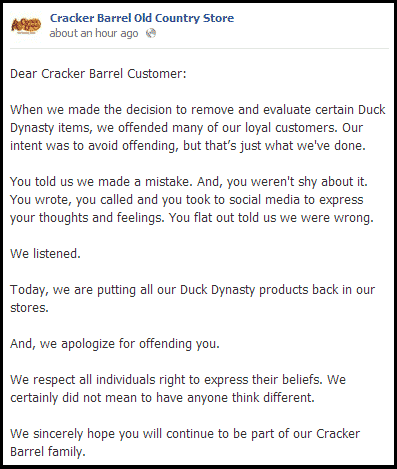 Cracker Barrel’s decision to reverse their decision is going to anger GLAAD and the LGBT community but those groups obviously don’t dine at the restaurant as much as the Bible believing fans of Duck Dynasty. Reversing its decision had nothing to do with politics or free speech. It was purely a business decision. And from the standpoint, it was a good one.

A&E will face a similar choice in the coming weeks. Millions of people have signed a petition against the network with the hopes of getting Phil Robertson back on the show and now the network is in a lose-lose situation. The spotlight is shining hot on A&E right now and their decision is going to be a major social talking point. A&E could lose its ratings juggernaut if they stick by their decision. On the other hand, the network will offend millions if they say that business is more important than its principles.

What do you think of Cracker Barrel’s decision? Do you think A&E will put Phil Robertson back on the show?