Did Facebook Ban Duck Dynasty Support Page Creator For ‘Too...

by Kim LaCapria 9 years ago10 months ago

In the social media blowup that has been Phil Robertson-gate 2013, one of the more bizarre claims made is one that the creator of the page Boycott A&E until Phil Robertson is put back on Duck Dynasty is that Facebook attempted to censor the wildly growing group — until the media uncovered their liberal thought policing. TYPICAL.

The idea that Facebook banned the Boycott A&E until Phil Robertson is put back on Duck Dynasty page because the social network disagrees with the outcry is rife — even Mike Huckabee repeated the rumor on his own Facebook page, saying:

OH MY GOD, IT’S BECAUSE THEY’RE ABOUT TO FORCE GAY MARRIAGE DOWN OUR THROATS AND POSSIBLY OTHER GAY-RELATED THINGS WE CAN’T EVEN SAY ON A FAMILY FRIENDLY PAGE.

The humanity. (Huckabee also wondered aloud why we haven’t banned “Muslims” because Islam is less tolerant of Christianity. And this man was an elected lawmaker, for crying out loud.)

The rumor is rife across the social conserva-sphere, with many believing Facebook has taken a stand against Phil Robertson, Duck Dynasty, and its supporters:

Just out of curiosity did Phil Robertson get banned from A&E?? Facebook is very unclear about the whole situation.

So let’s get to the bottom of this. Did Facebook actually ban both the page of Michael Rodeaux and Mike Huckabee’s pro-Robertson event? This is what Rodeaux says happened before a contact “intervened” and got Facebook to lift the “ban” this morning:

“Last night, you know it’s finals week, I’m a college student, I go to bed I wake up in the morning find out my account’s shut down. So there’s a pop-up on my screen when I try to log in and they marked it as the reason they banned me was because of a comment I made. And the comment was basically saying, ‘nearly 4,500 likes in one hour, amazing everyone please keep sharing.”

And here’s what happened, and I know this, because it’s happened to me personally, and it happens frequently, and it has nothing to do with Facebook censorship.

When one user repeatedly (or a series of users) “reports” your comment — any comment — it can trigger an auto-ban. 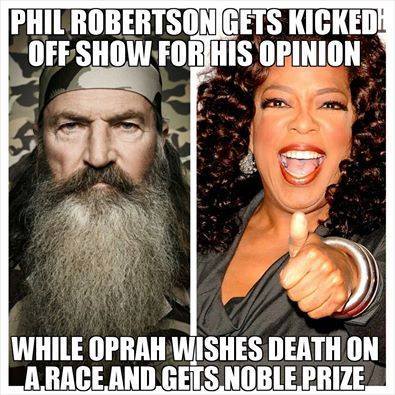 Given the fact that the Duck Dynasty support page grew so much, so fast, it’s likely many opponents simply “disliked” the status update — triggering an autoban.

Mike Huckabee? Same deal. People who disagree simply have to report the content, and the user is banned for a period of time without any review process.

Given that many Duck Dynasty support comments are being posted, there is zero chance the Boycott A&E until Phil Robertson is put back on Duck Dynasty page was the subject of a target, nor that Huckabee is being similarly “punished.” The simple facts are that a lot of people disagreed, which is enough to get you put in Facebook time out, no censorship required.