When it comes to the mobile space Facebook rules the market. Not only is the Facebook app the most used program of 2013, the company’s Instagram platform witnessed the largest user increase in 2013.

Facebook Mobile currently serves 103,420,000 million unique users, a 27% year-over-year change. While Instagram now counts 31,992,000 users among its ranks. Based on recently Nielsen numbers that is a 66% year-over-year.

While Instagram has jumped into the number 7 spot, it still has a long way to go in catching up to Gmail, an app which commands 64,408,000 unique monthly users for a 29% year-over-year increase.

Google rules the mobile space with Google Search, Google Play, YouTube, Google Maps, and Gmail, all rounding out the No 2. through No. 6 spots.

Neilsen also reveals that approximately two-thirds of Americans now own a smartphone, up from 56 percent at the beginning of the year. 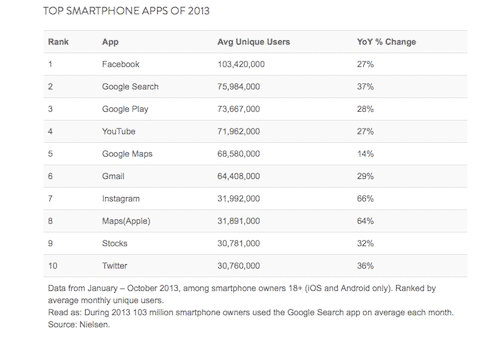