Student At Arapahoe HS (The School That Was Just Shot...

The reddit AMA beat is kind of our thing, so imagine our surprise when a student at Arapahoe High School (the school that just had a shooting yesterday) hopped right on the Internet and gave his first interview to reddit.

A few quick details about the shooting: Arapahoe is in the same district as Columbine, a few miles from the site of the Aurora massacre, and this shooting took place one day shy of the one-year anniversary of the Sandy Hook tragedy. Two were injured, and the gunman died in an apparent suicide. It is thought by authorities that he was targeting a specific teacher.

The student who gave the AMA went by “Ethan,” and claimed to have known both the shooter and the teacher he had targeted very well.

He said that the shooter’s intended target was both the librarian and a speech and debate coach, and that he may have been motivated by revenge after being kicked off the debate team. He claims that the shooter was “rude and roudy [sic]” while on the team, which lead to his dismissal.

“He was a little off but not fucked up enough to shoot up a school, man,” Ethan wrote, describing the shooter. “He was loud and funny and very social but seemed a little crazy and didn’t quite get some social boundaries.”

The top post wasn’t from Ethan, but a slice of advice from a survivor of the Chardon High shooting in 2012. That entry pretty much the most solemn and poignant thing I’ve ever seen on reddit: 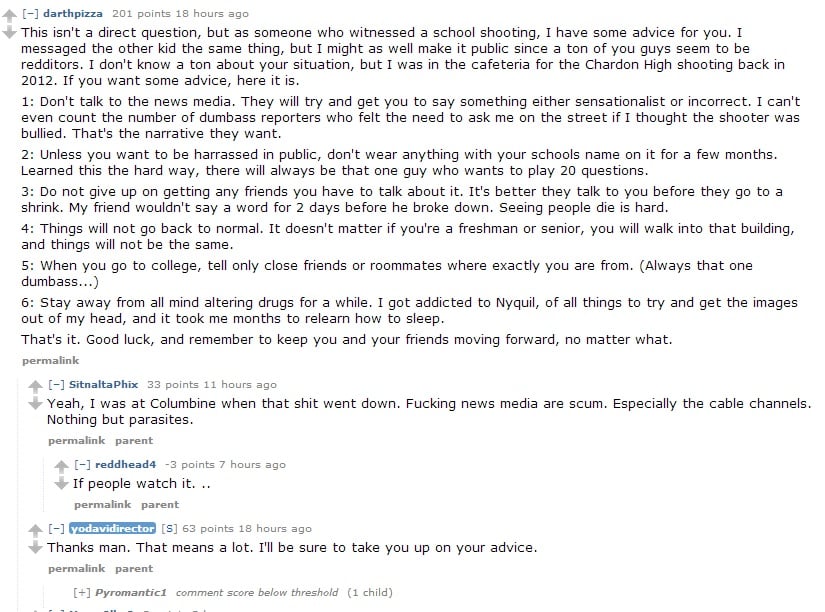 It’s one of the most interesting and unique AMAs ever (I strongly suggest you read it here) and it’s such a testament to the importance and power of social media and sites like reddit. Where the hell else are you going to get such a frank, un-filtered first-hand account of something like this before the media gets to it?

Yeah, we’re getting all gushy and shit, but the fact that this happened undermines efforts by national media outlets and law enforcement to “control the story,” and that’s just awesome if you ask me.

SocialNewsDaily tips our giant hat to you, Ethan.