Come on, Obama. You’re supposed to be the social media president.

The White House is the subject of our latest brand fail discussion after a photo of President Obama holding a sign reading #GetCovered was vandalized by shoppers on Twitter because this is the Internet and that’s exactly what happens when you leave yourself so vulnerable.

I know Obama really just wants to get the word out that this time the website really really really works and that we’ve got 7 million vacancies to fill by March to make fetch happen with this ACA thing, but come on, Mr. President. You just got upstaged by Ted fuckin’ Cruz. 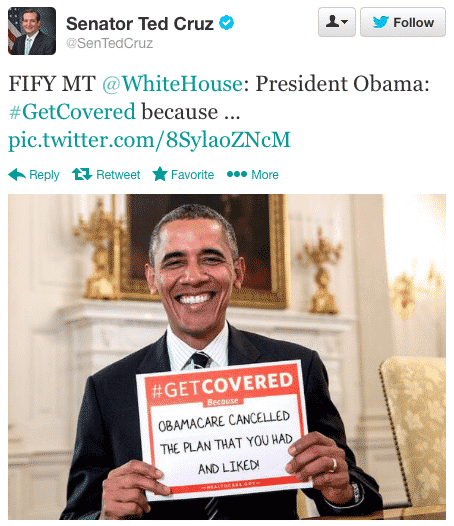 Obviously, he wasn’t the only one.

OK, this Love Actually debate has *really* gotten out of hand. pic.twitter.com/HPaajal9fc

There are also some pretty topical entries:

#GetCovered You never know who will take offense at innocent banter. pic.twitter.com/g5lMaa1HiU

#GetCovered because https://t.co/S3xfafrfsQ is now 100% functional for 80% of visitors to get thru 40% of the process! pic.twitter.com/JFBJQzyf3s

#GetCovered because your plans were cancelled “under the law … you’ve got to replace them” https://t.co/wU96hoqUOe pic.twitter.com/hSIepF5IGO