Pins For iOS Takes Over Where Foursquare Private Check-Ins Left...

Early this week the team at Foursquare discontinued the use of private check-ins, a system that allows users to privately track places they have visited. In the wake of that cancellation an iOS app called “Pins” has emerged. The app allows users to collect and organize everywhere they go, while also sharing specific lists with others.

If Pins sounds familiar that’s because we already have PinDrop, Drawer, and various other apps on the market. Heck even Pinterest allows for “Place” pins to now be utilized.

Pins hopes to stand out by allowing users to create collections of their favorite places. For example you could create “best fast food joints,” alongside “best museums in Chicago.” The platform also allows places to be hashtagged which can add them to multiple lists at one time. Hashtags are color-coded to give a nice look to the Pins interface for iOS users.

Users can keep lists private, share them with friends or open them to the public.

Pins also offers support for “picture pins.” Simply import photos from your iPhone’s Camera Roll and use those photos to create pins. Take a picture of your favorite restaurants and all of a sudden you have more location based Pins to add into your collection.

The Pins developers have also added Yelp integration, Facebook check-in capabilities, and soon the ability to check-in via Foursquare.

With a sleek and simple to understand interface Pins could become the location collection for users who take advantage of various social networks.

The Pins iOS App is currently rolling out as a “Staging” product in order to avoid serve overload issues.

Pins is angle funded by Yair Goldfinger and Adam Neumann. 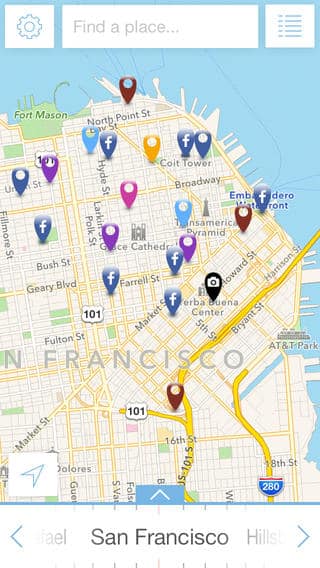