Mena Suvari’s Christmas Photo Is All Kinds Of Awkward

Mena Suvari’s Christmas photo is all kinds of awkward, proving celebrities have no qualms with donning ugly sweaters in the name of mocking real family Christmas photos.

The shot, uploaded to Instagram on Monday, shows Suvari, her boyfriend Sal Sanchez, and her cat, Bianca, sitting on an antique-style chair in a traditional family pose. But there’s nothing normal about the photo after that.

Both Sanchez and Suvari are sporting spectactularly ugly matching nutcracker sweaters, while Suvari’s hair is worn in a side ponytail. Beyond the couple’s strange matching appearances and awkward smiles, there’s also the randomly photoshopped pic of Bianca hanging above their heads.

Suvari’s photo is one of several celebrity Christmas photos to appear in the past few days. Kelly Clarkson also uploaded a photo to her Instagram account of herself, new hubby Brandon Blackstock, and her stepchildren Savannah and Seth. All four, plus their two dogs, are being held hostage by Santa. 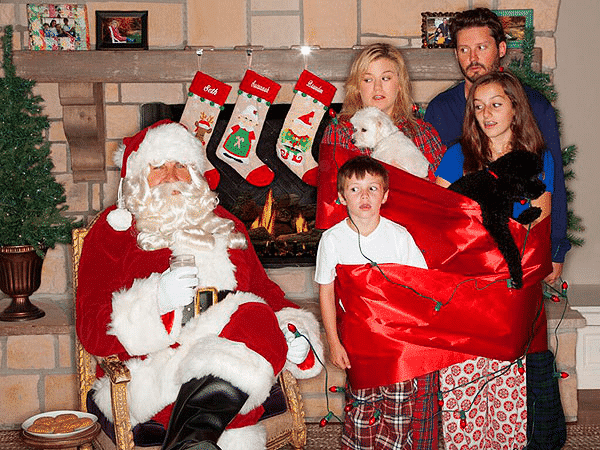