DiGiorno Pizza Really Hurt Our Feelings, So Here’s A Video...

Last week when Carrie Underwood starred in that Sound of Music thing (tl; didn’t watch), we were glued to your Twitter feed as you live-tweeted your reaction and we hung on every single character.

Being a social media website, we thought that whoever runs your Twitter feed deserved some recognition, so we reported on the entire thing. What’s more, we were the first to do this comprehensively.

You spotted the article, and rewarded us with your re-tweet. Such joy was felt at SocialNewsDaily’s office that had not been felt before and will surely never be felt again.

We had a bottle of champagne marked “POP CORK WHEN DIGIORNO RETWEETS” and goddamnit, we drank it down.

But then, we noticed that you dropped our retweet. Within an hour of its posting, it was gone … suddenly replaced by the likes of The Hollywood Reporter …

And of course, BuzzFeed …

.@DiGiornoPizza Live-Tweeted NBC’s “The Sound Of Music” In “Unplanned Event” And It Was Amazing https://t.co/4I40q45ngP

Once we realized that your profile had gone up so meteorically that we just weren’t famous enough for you anymore, the mood around the water cooler changed dramatically.

Oh, there was sadness …

Yeah, there was a little bitterness.

We’ll even admit to a little vomiting (we drank that whole fucking bottle of champagne, and ate a bunch of your pizzas).

Seriously, DiGiorno. Don’t you remember when you were trying to make ends meet slinging frozen pizzas from the back of a truck in the gas station parking lot? Don’t you remember what it was like to be an up-and-comer with big dreams and big heart? We know you at least saw and appreciated the article we wrote about you, even if we were so excited that we forgot to screencap the rewteet: 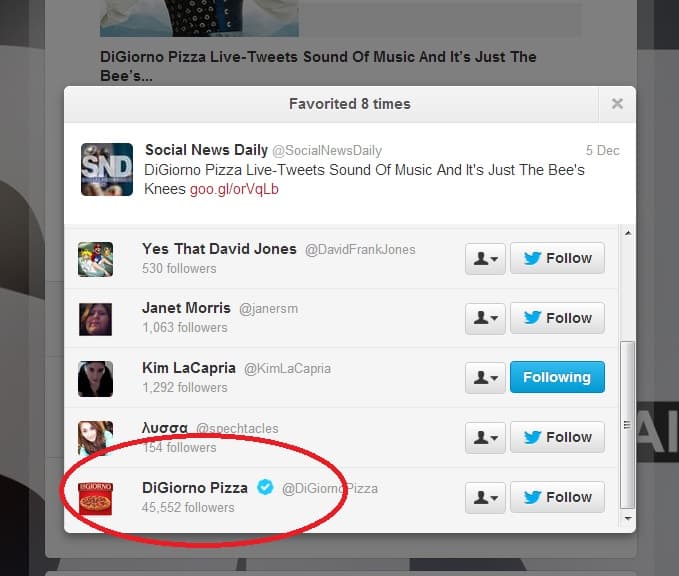 It just hurts, DiGiorno. So naturally, we must exact our vengeance the only way we can, and that is to show this video of animals being abused by your apparent cheese supplier. We know you’ve already dumped the Wisconsin-based company, but we still have do our part to rub it in like the honest journalists we are.

Hope this article had enough gifs for you assholes.