Nairobi Senator Mike Sonko has come under fire after he photoshopped himself in the embrace of Nelson Mandela and then posted the photo to his Facebook account.

In the photo, shown above, the recently departed Mandela is seen giving Sonko a big huge. However, that embrace was not his to steal. Instead the embrace belonged to none other than famed boxer Muhammad Ali. Here is the original embrace: 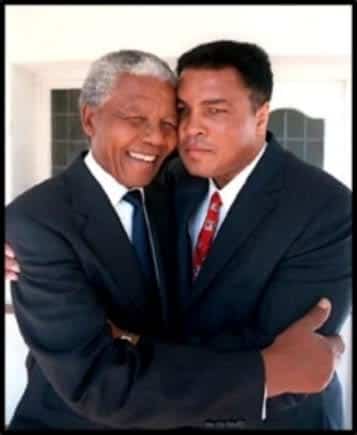 If we have learned one thing in the years since the social web came into existence it is that you can’t fool a bunch of people with a horribly constructed trick. Twitter has not been amused by the Senator’s bad attempt at immortalizing his own life with the held of the deceased peacemakers image.

mike sonko photoshopped himself with mandela, looks like his brains have been held captive somewhere away from his head for 27 years now

Lol! RT @GrantBrooke: And Nairboi Sen. Mike Sonko posts a photoshopped photo of him with Mandela on Facebook. SMH pic.twitter.com/kMF1OCp3nx”

And another comment about Mike Sonko and his lack of mental fortitude:

mike sonko photoshopped an image of him with nelson mandela, he should photoshop himself with some brains

It looks like Sonko is giving Vladimir Putin a run for his money in the fake media arena.