It looks like there is trouble brewing in Hollywood. Well, not Hollywood. But that place just out of the spotlight where really rich and semi-famous people hang out. Yeah, there’s trouble brewing there. Paris Hilton issued a mafia-esque threat at Lindsay Lohan last night after Hilton’s brother Barron got his butt kicked at a party in Miami.

Barron Hilton posted a photo on Instagram, showing his face covered in bruises and cuts. Barron told police that Lohan approached him at a party in Miami and had one of her male friends attack him. Barron said that Lohan was laughing at him and egging the the man on during the attack.

Why would she do that? Apparently Lohan overheard Barron badmouthing her at a party.

Lohan reportedly said: “You talk s— about me to my boyfriend, this is what you get.”

Well, when you beat up Barron Hilton you have to deal with the Hilton family mafia. Paris took to Instagram to tell Lohan that she should watch her back. Paris has deleted her comment but a screenshot shows that Paris means business. 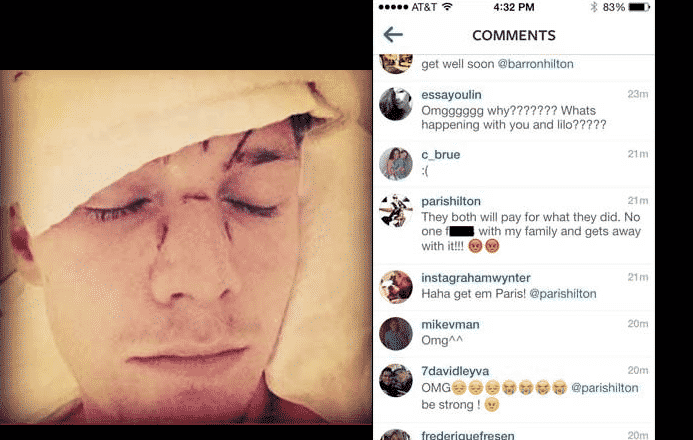 Paris and her sister Nicky also sent out a few messages on Twitter that may be related to the incident.

Bad things happen when you hang out with bad people.

For what it’s worth, Lohan’s father Michael said that Lindsay had nothing to do with the attack and wasn’t even at the party at the time of the incident. No charges have been filed against Lohan or the attacker yet.