Jameson Witty, 18, was arrested on Thursday afternoon for stealing part of the crashed 2005 Porsche Carrera GT that Paul Walker and Roger Rodas died in. While Witty is a suspect in the case, there are some pretty damning photos on his Instagram account that admit to the wrongdoing.

Witty allegedly jumped out of a car at an intersection and stole a piece of the red Porsche off a tow truck while the driver was stopped at a red light. He then returned to the car he was riding in and left the scene, reports Raw Story. The teen and his 25-year-old friend are accused of the crime. While Witty was arrested Thursday morning, his friend was out of state and was talking to sheriff’s deputies about turning himself in. 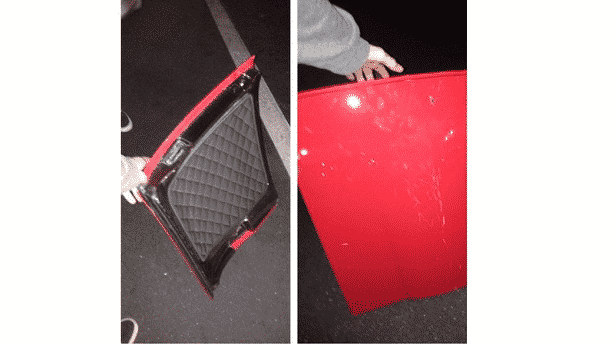 Photos on the teen’s Instagram account show what appears to be a roof panel from the wrecked Porsche. Witty labeled the photo with the words, “Piece of Paul walkers car, took it off a tow truck at a stop light.” While it is certainly a macabre souvenir of the actor’s fate, it will likely cost Jameson Witty more than it was worth to get.

The Sheriff’s department is recommending that Witty be charged with grand theft and tampering with evidence. His bail was set at $20,000.