Nelson Mandela has died after months of struggling with illness. He was 95.

She confirmed that he will have a state funeral and that flags will fly half-mast beginning tomorrow.

Nelson Mandela is 95 years old and has been in “critical but stable” condition for months now. — Lydia Polgreen (@lpolgreen) December 5, 2013

Because the story is still breaking, very few details are known about Nelson Mandela’s death at this time.

His cause of death was not specified.

The South African government has set up a tribute page for the late leader, confirming his passing. Additionally, the BBC has already released an obituary for Mandela.

Here’s a look at how Twitter is reacting to the news of Nelson Mandela’s death:

Thankful to @NelsonMandela for having shown us so much wisdom and leadership. His legacy and example will always stay with us. RIP #Madiba

I know this has nothing to do with books but R.I.P to Nelson Mandela, a true inspiration pic.twitter.com/dZvpltJXDt

Feel blessed 2 have met #NelsonMandela ..such an incredible contributor 2 humanity. He taught me that true dignity is precious beyond words!

One of the greatest man in the world and the greatest in our continent!!:( RIP Nelson MANDELA. MADIBA 🙁 pic.twitter.com/LHYyNKPd5c

https://t.co/KHEU8W6u9z An amazing life. “Education is the most powerful weapon which you can use to change the world” -Mandela

From the @USATODAY: 15 of Nelson Mandela’s best quotes. RIP one incredible human being https://t.co/x3dH1YP22L

“It always seems impossible until its done”- Nelson Mandela Angel your impossible work, that u made possible is now done. RIP

Sorry to hear of the passing of Nelson Mandela. I always knew he was a great man, but I had no idea how great… https://t.co/5jEsNI2llv

My heart dropped. RIP Nelson Mandela. You gave us strength and hope. His cover on @Newsweek when he was freed pic.twitter.com/NpfpcNU5DN

RIP Nelson Mandela. You were a gift to this world.

Obama on Mandela: “I am one of the countless millions who drew inspiration from Nelson Mandela’s life.”

The best way to understand the greatness of Nelson Mandela is to look at Robert Mugabe. He could easily have become that. He refused.

Had the greatest honour in meeting Nelson Mandela, what a tremendous human being he was.. Stood for something and fought for it. Rest well

There were only 3 people that I wanted to meet in life, Nelson Mandela was one of them.

Nelson Mandela was one of the great pioneers of human rights whose courage inspired people around the world.

#RIP Nelson Mandela. The best example of a human being I can think of. The world is a better place because of you. Thank you

“Can we all make a minute of silence cuz Nelson Mandela, one of the best human beings all around the world is gone?” #RIPNelsonMandela

Nelson Mandela is now truly free. Rest in Peace Madiba. “Resentment is like drinking poison and then hoping it will kill your enemies.” 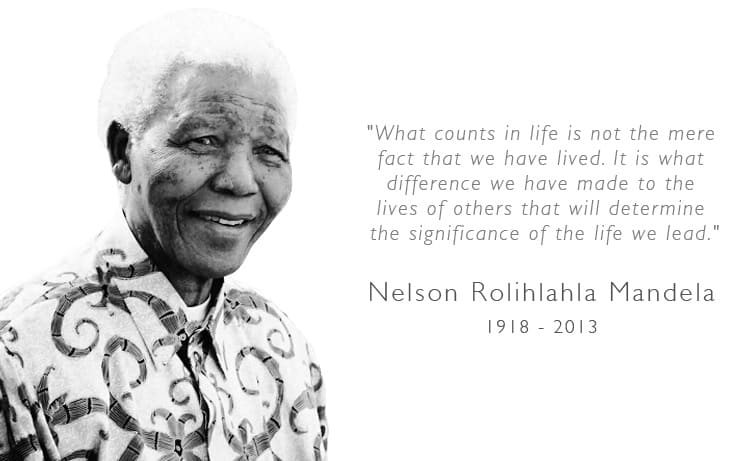