Everest Wilhelmsen Of The Christian American Patriots Militia Is Back,...

Everest Wilhelmsen, how has the Secret Service not picked you up yet?

Our favorite Germany-based leader of the questionably threatening Christian American Patriots Militia has issued yet another warning against President Barack Obama, though this time includes Congress in the threat. 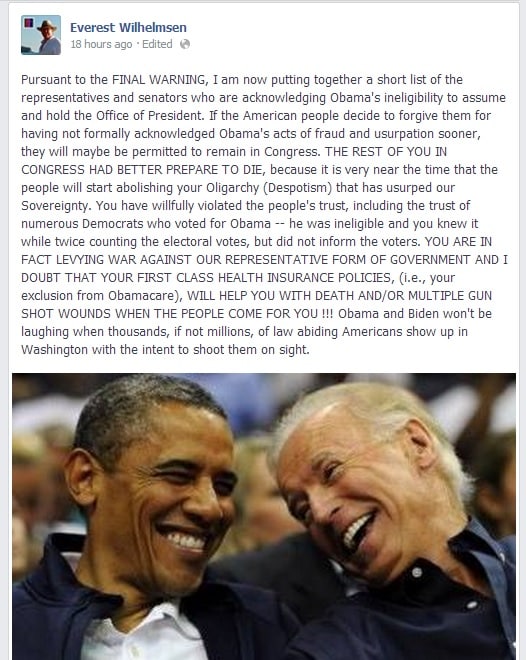 Let’s discuss Everest Wilhelmsen once more, shall we?

Wilhelmsen’s first major threat against the Obama administration was reported hundreds of times as it went viral last week, but apparently dodged removal by admins, according to several sources who reached out to SND. Despite the ominous and threatening language used, the post was not found to be in violation of Facebook’s community standards.

A persuasive theory floated by Kuns argues that Wilhelmsen is dodging the censors because the photos he uses are “clean.” When you flag the post, the only thing that goes in for consideration is the photo, she says. Technically that’s not true. If you click on the photo itself, you’re only given an option to report the photo. But if you’re looking at it from Wilhelmsen’s timeline, that little arrow on the top right lets you report the entire wall post.

In any case, the post from last week has since disappeared. Whether by too many flags or Wilhelmsen’s own hand, I don’t know. But I think the latter is unlikely. While he may not be an actual threat (as I have argued before), he is without a doubt very serious.

He Is Making Actual Threats

On our last post on Wilhelmsen, a few commenters argued that he isn’t actually making real threats. Rather, he is using metaphorical language to express his opinions about the Obama administration and blah-dee-blah. Make no mistake. He is making real threats.

In addition to his Facebook page, Wilhelmsen also keeps a blog with belligerent statements like “They think Americans are too comfortable, passive and weak for another get down and dirty blood and guts revolution. They have been underestimating our allegiance to our Republic.”

“These two men won’t be laughing when thousands, if not millions, of Americans show up in Washington with the intent to shoot them on sight: Revolutions are not pretty! Barack Obama and Joe Biden forget that blood has been shed on this land before so that We the People and our posterity may be free. Sure there is the risk, there is always a risk in war. But the prospect of being enslaved makes the fight necessary: We, American Patriots, will defend our Constitution.”

That’s not exactly what I would call “metaphorical.”

He Reeks Of Catfish

I know that the liberal blogs are absolutely terrified of this guy, and really all religious conservatives who like guns, but I am still deeply skeptical of Mr. Everest Wilhelmsen. He has a well-established presence online. He has a Twitter account, a blog, and is an avid if controversial community member at Wikipedia. He has thousands of friends on his Facebook account.

“Everest” is a bit of a pen name. His real first name is “Hubert,” and “Everest is actually his middle name (as he explains in the most Lion King-esque way I’ve ever seen on his blog).

A few things about him still give me pause. I don’t understand the Germany connection. He apparently lives there, and politics there seem to be of particular interest to him, per his blog. From his Facebook page, he appears to be well-traveled, though his educational background is questionable.

He lists California’s Art Center College of Design as his alma mater, and that’s just dandy. But he also lists “Teheran American School” in his education, an apparent misnomer of the Community School of Tehran, a boarding school for the children of missionaries shuttered in 1979.

Given his fixation on religion, it’s entirely possible that his parents were Christian missionaries. But we can’t confirm that.

My big problem with him, aside from his ambiguous location, is that he only has the one photo everywhere online despite his vibrant online presence. For a guy who apparently has a family, you’d think he’d have … I don’t know … pictures with them. 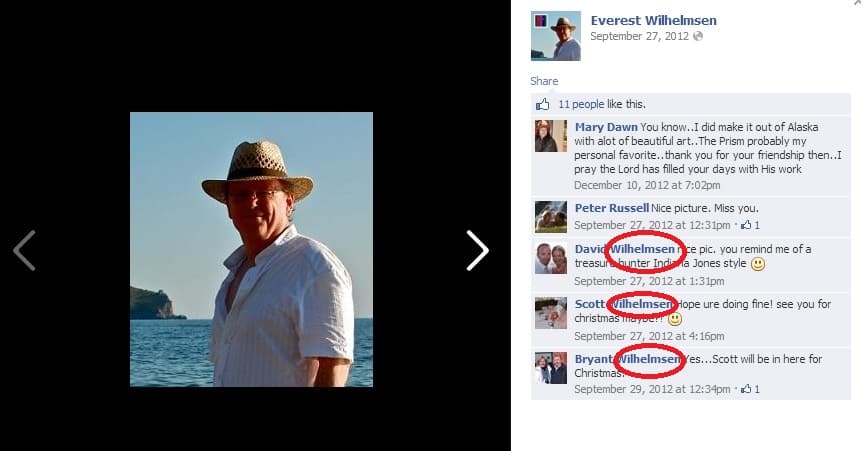 To me, he’s like … half of a real guy. Some of the stuff you need to be a real guy is there, other stuff is not. He probably is a real guy who built a cult following under this pseudo-biographical identity. And if that’s the case, he’s really a bit of a coward, isn’t he?

Boy, would I like to ask him some questions.

I’ll give you a soapbox. I want to know more about you before you either get picked up by Secret Service or show up on the White House lawn alone with an AR-15 and get gunned down by Secret Service. I think we’d all like to know whether you and Aslan are really going to take on the U.S. Government or if you’re a bit of a phony (as I suspect). 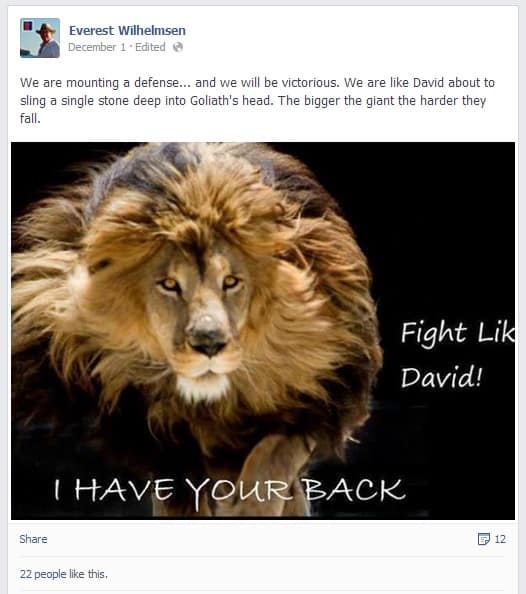 Drop me a line. We’ll give you a fair shake.