Black Friday is a day of mega sales for those brave enough to face crazy people, and Cards Against Humanity decided to go against the grain with a $5 more sale.

The game typically sells for $25, and as Co-Founder Max Temkin explained in a new blog post, the reverse Black Friday sale was actually successful.

So how did we do? A little better than last year. We kept our position as the best-selling toy or game on Amazon. My guess is that peoples’ buying decisions just weren’t that affected by $5.

Before coming up with the $5 more idea, the idea of a one cent off coupon was considered, but Cards Against Humanity has never offered any discounts.

Other Co-Founder Ben Hatoot brought up the idea of selling the game for more, and Max said he fell in love with it instantly.

According to Max, when contacting Amazon to update the price of Cards Against Humanity, “they thought it was funny but were also pretty annoyed.”

Social media played a huge role in spreading the word, and the Black Friday campaign quickly hit the front page of Reddit.

Here were just a few tweets about the wacky idea:

BEST BLACK FRIDAY SALE EVER! This is awesome! https://t.co/Hie0tOpDsm

The only Black Friday sale notice I approve of, from @CAH. https://t.co/92jegln8Q2

Oh man, if anybody’s interested in Cards Against Humanity, today is the day to buy. GREAT BLACK FRIDAY SALE! pic.twitter.com/cirlrfvioh

I’m gonna predict that Cards Against Humanity is actually going to have a great sale day. I think people WANT to give them extra money. 😉

Max also went on to say that Cards Against Humanity saw a nice increase in sales on Saturday, likely due to buzz about the Black Friday sale. 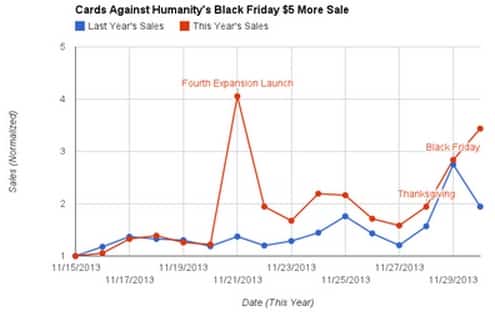