WhatsApp is a popular group messaging service, and according to a new report, 44 percent use it at least once per week compared to 35 percent for Facebook Messenger.

Mobile research company On Device analyzed responses from over 3,700 smartphone users in the U.S., South Africa, China, Brazil and Indonesia.

Asking, “Which social messaging app do you use at least once per week?,” here were the top responses:

According to On Device, BBM is most popular in Indonesia and South Africa, coming in at 37 percent and 34 percent in terms of weekly usage. 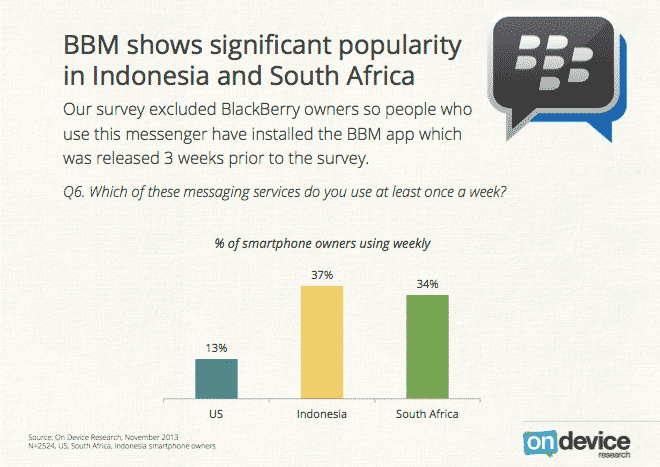 When it comes to use of emoticons or what On Device refers to as “stickers,” usage was highest among Indonesian respondents at 84 percent.

Back in December 2012, Facebook was reportedly interested in acquiring the mobile messaging service, and now it becomes even more clear why.

In April, WhatsApp CEO Jan Koum spoke at D: Dive Into Mobile, and announced that it had surpassed Twitter in terms of monthly active users.