Someone’s about to get a visit from the Secret Service.

Today is the 50th anniversary of John F. Kennedy’s assassination, and what better way to celebrate than by declaring open season on President Barack Obama on Facebook? 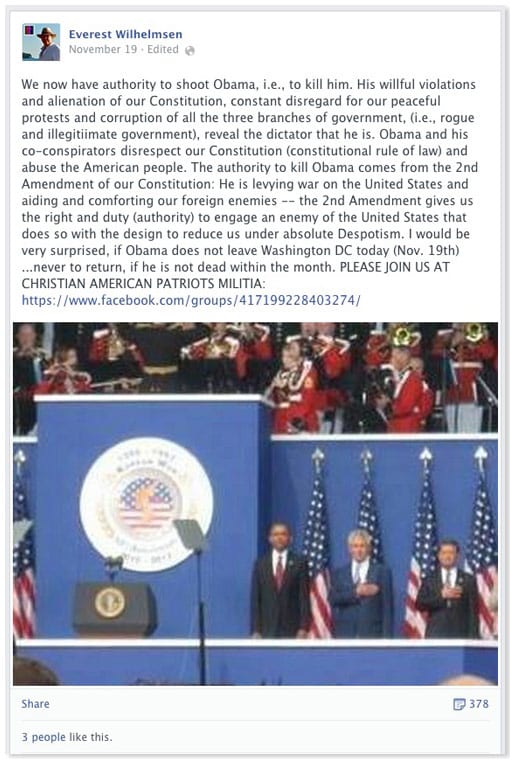 Do you want the good news or the bad news first? Good news it is.

The good news is that all those shares you see there are either journalists or concerned citizens reporting Wilhelmsen’s threat to the FBI. And yes, as we’ve seen time and time again, it’s very likely that a sensory deprivation tank figures into his immediate future for talking like this on Facebook. It’s not about freedom of speech, remember. Threats against the lives of others, especially public figures like the president, are taken very seriously and do not constitute protected speech.

The story is going viral on smaller blogs, and none of them include a link to Wilhelmsen’s profile and use a screencap instead of an embed from Facebook. Thus, I was hoping I could hoax-slay this pretty handily.

Unfortunately, Wilhelmsen is a real guy, he really did say this, and he even followed-up with more lunatic fear-mongering, meaning that this wasn’t just a frustrated one-off: 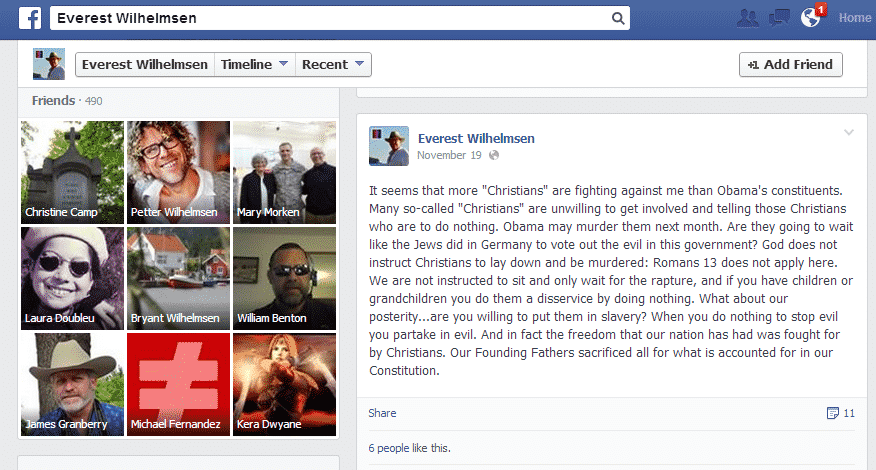 The rest of his page hosts various “a call to arms” posts, encouraging anyone who happens to stop by his page to join his Christian American Patriots Militia group, which has just over 1,400 members. 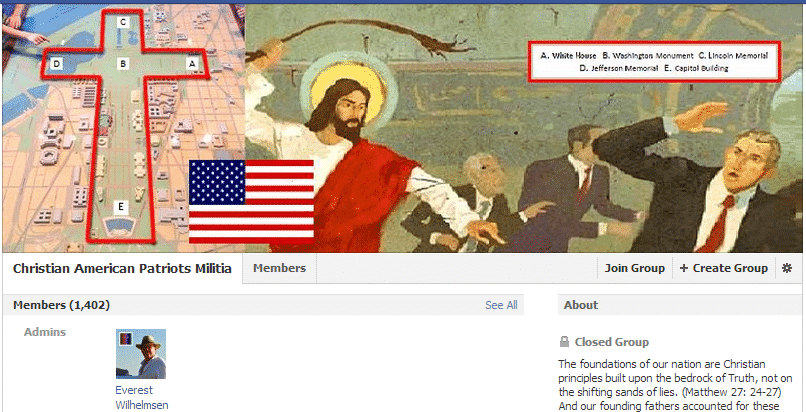 The language on the group’s page is pretty much standard fare for far-right “patriot” militias.

“Christian American patriots, such a design is now not only VERY EVIDENT, but is being RAPIDLY IMPLEMENTED, i.e., all the three branches of this government are now openly (arrogantly) violating and alienating our human rights which are the highest and foremost security measures of our nation—usurping all sovereignty.”

The human rights being violated are not specified, and there’s a pretty eccentric mix of out-of-context Bible quotes used to support an armed coup against the federal government.

There is another little bit of good news.

We’re pretty apolitical around here, so we’re not really interested in forcing some connection to the Tea Party, turning this into a gun rights op-ed, or even waxing philosophical about the dangers of religion (in fact, as you’ll note above, Wilhelmsen made it a point to separate himself from “most Christians”).

We say all that to say: We don’t consider this guy very dangerous.

Sure, we can’t tell how “serious” he is, or how organized, but we’ll go out on a limb and guess “not much.” Sure, there’s anger here, and anger can be scary, but more often than not, this kind of posturing doesn’t result in much. Point is, we’re not going to make you scared of some kind of violent right-wing uprising over some group the local cops could handle on a Saturday afternoon. That would be wholly irresponsible, .

UPDATE OF THE UPDATE: So, this guy apparently lives in Germany?

What do you think? Will the Secret Service be knocking at Everest Wilhelmsen’s door any second now? Furthermore, we’re interested to know if you think any domestic threat against President Obama’s life should be taken seriously, especially in our digital culture.