by Kim LaCapria 10 years ago3 months ago

Despite the smaller size of its social network Twitter in 2011 received nearly 50% of all media mentions compared to Facebook. That number shouldn’t really come as a surprise since news agencies, talk show hosts and other celebrities have traditionally flocked to the openness of Twitter to post facts, breaking news events and other information while aggregating content from the network to help along in the reporting of stories.

However with Facebook at 45 percent in 2011 and the company nearing ever closer to 1 billion fans we believed that gap would shorten but in fact Twitter has managed in Q1 2012 to actually widen the gap, now commanding 55.17 percent of all media attention as Facebook falls to 41.18 percent and LinkedIn tumbles from 3.33 percent to 2.23 percent. 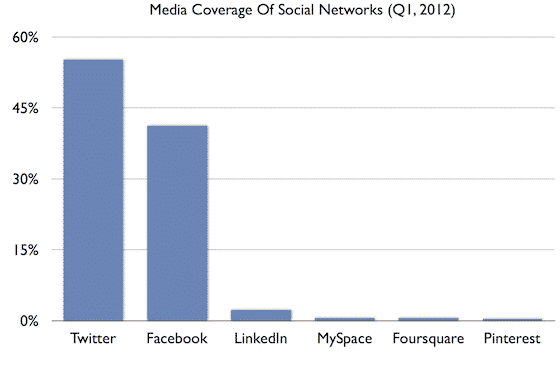 While we have been hearing A LOT about Pinterest in the last few months the company is still only garnering 0.36 percent of media attention which shouldn’t come as a surprise since the social network is more focused on sharing arts, craft, recipes and magazine articles, hardly the type of breaking news content most networks are looking for. Pinterest is also still in closed beta which has severely limited its user base. Regardless Pinterest is still closing in on location based service provider Foursquare as MySpace still continues its fall from grace.

Just for comparison sakes here are the numbers for March 2012: 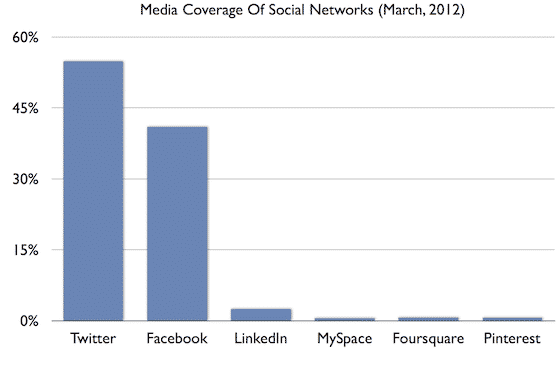 All data found above comes to us from Highbeam Research.