The McDonald’s McRib sandwich is a favorite among many fans of the restaurant, even if it does look like a frozen piece of styrofoam.

An unknown employee of the franchise chain recently posted a frozen McRib patty online. The “before version” of the sandwich is far from the yummy looking piece of meat that is heated up and covered in sauce before being photographed for advertising purposes.

We have known for a long time now that the McDonald’s McRib is made up of many “left over” parts of a pig, specifically the “trimmings” and intestine. Yet none of that seems as disgusting as THIS photo: 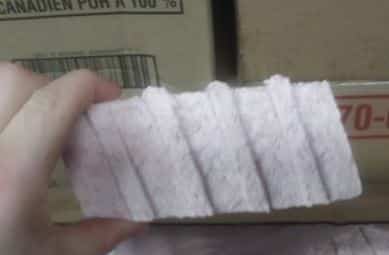 Which is turned into this:

Of course McDonald’s McRib fans would never worry about such petty things would they? Judge for yourself:

#nofilter because it’s nasty enough. This is an image of a frozen mcrib that surfaced online. I have… http://t.co/6iMTpa8bI7

In other news, frozen #McRib looks like something kicked loose from the driveway in the last scene of Fargo. http://t.co/AoRWioDNMa #gross

why are people surprised the McRib is frozen? how else would it get into that shape? — Steve LaMonica (@stevelamonica) November 14, 2013

Here’s the truth about the McRib:

From the freezer to your fork, the #McRib is back. It’s a #foodscience experiment gone bad. http://t.co/f91QFu7NlA

There is of course the frozen McRib jokesters among us:

I’m sorry, I know some feel otherwise, but the picture of the frozen McRib made my mouth water. Bring it back soon @McDonalds

Somebody get that last guy a nice hot meal, he is obviously starving!

I personally have to compliment McDonald’s for magically turning that frozen block of freezer dried meat into something edible and delicious.

The Daily Globe posted a response from McDonald’s which officers no excuse for the flash freezing process:

“One reason our customers love the McRib is its fun and wonderful shape. Just like a burger patty is formed to be round and flat, we form the iconic McRib in the shape of traditional ribs. We then flash freeze the patty to seal in flavor and freshness, just like you freeze meat in your own freezer, before going to our restaurants.”

Are you surprised by the look of the frozen McRib sandwich?

The moment he was inaugurated, immediate changes made by Biden made headlines across the country. These are many of the controversial issues and topics that were shunned and ridiculed by the former administration. Americans can finally breathe a sigh of relief that these concerns have finally reached government policies. It seems clear that Biden has been… END_OF_DOCUMENT_TOKEN_TO_BE_REPLACED

Presidential pardons are one and many in the history of the US. There are many times when US Presidents granted reprieves for their citizen’s misdeeds. The US President may grant a pardon for any individual, including himself, for any crimes done against the country and its citizens. This issue of Presidential pardons has been trending… END_OF_DOCUMENT_TOKEN_TO_BE_REPLACED