Lil’ Kim is a zombie photo thief! That’s the accusation floating around on Reddit today and user Sssamanthaa has some pretty damaging evidence to back up her claim.

What’s this evidence I speak of? Well, Sssamanthaa is the girl in the image, the person who did the makeup, and the one who took the photo. She also posted the image to Reddit last month (as well as a tutorial on how to do the makeup) before the release of “Dead Gal Walking.” Needless to say, I’m pretty sure she knows what she’s talking about.

Lil’ Kim has been sharing the photo on Instagram to promote her new single “Dead Gal Walking” and has even added her own watermark to the image.

Here’s a screenshot of Lil’ Kim’s Instagram page. (I’m guessing the actual post will be taken down soon.) 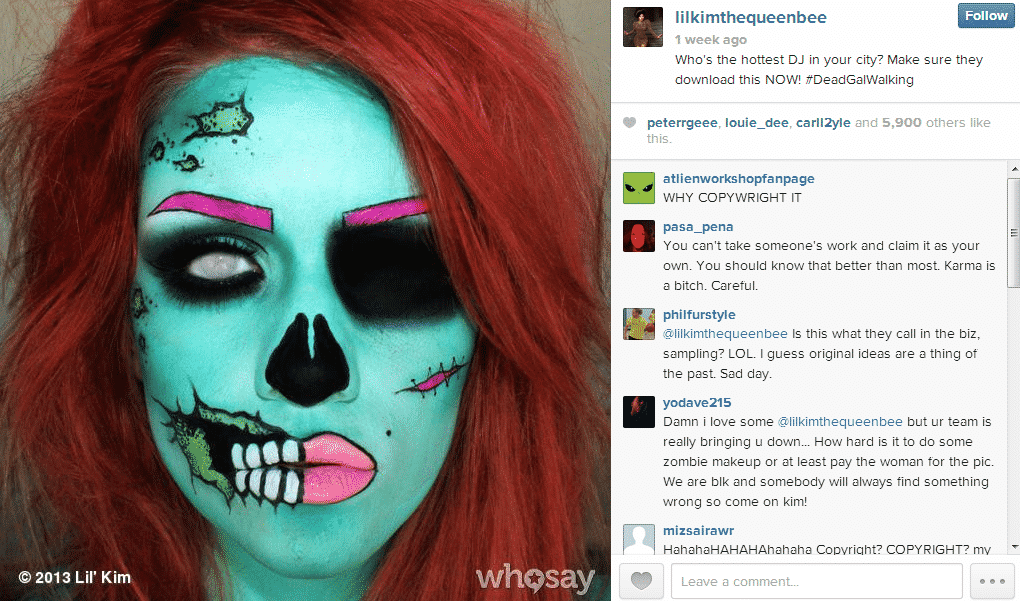 Notice all of those comments? Yeah, even Lil Kim’s fans are pissed that she stole the photo.

Sssamanthaa posted her problem on the legal advice subreddit this morning asking for help. The general consensus: Lawyer up.

But let’s not condemn Lil’ Kim just yet. We obviously don’t have all of the information yet and there are a few scenarios that can play out. Maybe Lil’ Kim had nothing to do with the image selection. Maybe Lil’ Kim and Sssamanthaa were in contact about the photo but someone wasn’t happy with the contract. Or maybe Lil’ Kim used the zombie makeup tutorial on Ssamanthaa’s identical twin and took an original photo…

Yeah, she probably stole the photo.

Sssamanthaa said that she contacted Lil’ Kim’s team but that she hasn’t received a response yet. The image is also still up on TwitMusic and Lil Kim has posted it several times to Instagram. It looks like it’s time to bring the lawyers in.

On the bright side, Sssamanthaa is getting some recognition her talent. Now let’s hope that she gets a little money for it too.