Announcing SND’s Petition To Keep Patrice Wilson Away From Alison...

Patrice Wilson, you have got to be f***ing kidding me.

For those of you who don’t know, Wilson is the man behind such obnoxious Internet hits as Rebecca Black’s “Friday,” Nicole Westbrook’s “It’s Thanksgiving” and most recently, Alison Gold’s “Chinese Food.”

The gist is this: His company, ARK Music Factory, takes teenagers desperate to break into the music biz, writes them a song, records it, films a music video, and produces everything for a few thousand bucks. He has been accused of exploitation (which he has denied), but his real vice, for a long time at least, seemed to be shameless self-promotion.

To wit, he cameos in every “project” he undertakes, and often performs under the stage name “Pato.” With every subsequent video released, his facetime only seems to increase.

It’s his latest video that finds us all here today.

Released last week, “ABCDEFG” is his second “collaboration” with 12-year-old Gold, and it is somehow more pedo-tastic than “Chinese Food” (but we wrote about that here).

I’m still trying to wrap my head around this a week later, so maybe I’ll just go with a basic timeline instead of snark: The video has Wilson peeping through Gold’s window, inviting her into a windowless van, and even “spiking her drink” with a mystery potion, all with a chillingly sincere rictus grin.

Celebuzz has a superior run-down here.

Most sober critics just think that Wilson is doing the Tom Green thing, that is – anything to stay in the limelight, even if that means he becomes an object of our annoyed, collective hatred. Cracked’s Soren Bowie theorized around the time of “It’s Thanksgiving” that the hate-sharing of Wilson’s videos is strategic, and that his exploitation of young girls who want to play pop star is so unprecedented that Wilson might just be pure evil for continuing to practice it.

Naturally, we’re amenable to that theory.

Others, like Christopher Hooton at Metro, think that Patrice Wilson is just trolling us, and that “ABCDEFG” is evidence that he knows exactly what he’s doing. If you buy this narrative, Wilson is still evil. But instead of pedo-tastic/exploitation evil, he’s the “sipping on Mai Tai’s in the Bahamas, giving the world the finger while we bankroll his holiday” evil. A master troll of the highest order.

That’s why SocialNewsDaily is proud to announce our very first Change.org petition. 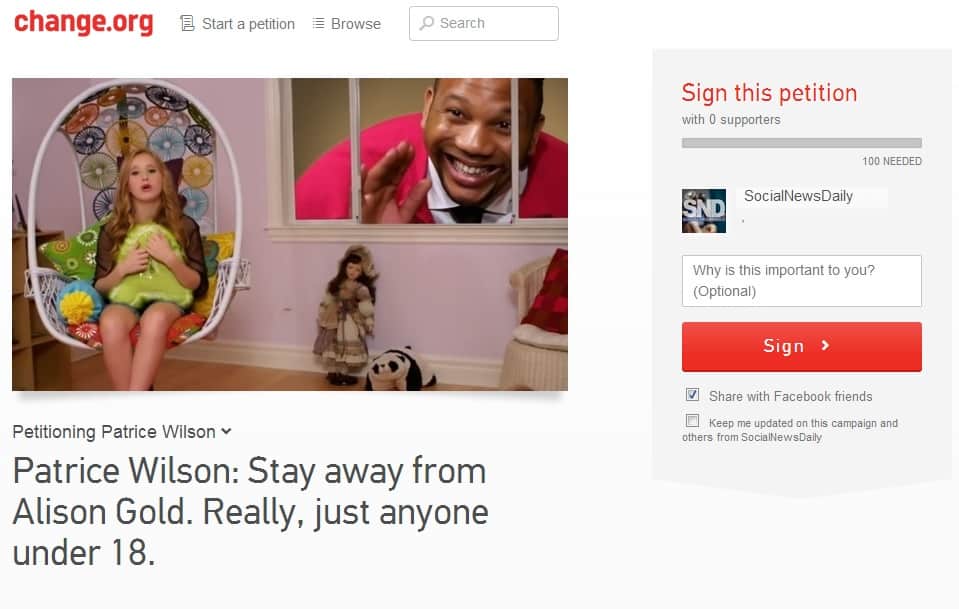