Twitter Could Have Been Named ‘Smssy,’ Early Designs Show

Twitter spent a brief amount of time as “Twttr,” but according to Nick Bilton, author of Hatching Twitter, it could have been named something entirely different.

During research for his book, Bilton got access to early internal emails that contained designs for various logos.

While “Twitter” and “Twttr” were among the candidates, “Smssy” was also a potential name for the upcoming social network. 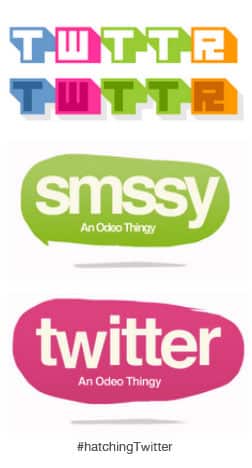 However, other names also included “Twitch” and the sure to go over well “Friendstalker.”

The above logos were designed by co-founder Biz Stone who has since left the company to work on an app called Jelly.

The very first version he explored was a red jagged oval with off kilter letters cut out in white. Below the logo sat the tagline: “An Odeo Thingy.” He described another version in an email as having a “retro atari vibe.” And there was also an option of a large green speech bubble with the word “twitter” written in lowercase.

Stone’s designs were left collecting dust, and in June 2006, a logo from other co-founder Noah Glass would become the official look.

Here’s how Noah described his design:

“This logo is engaging and visceral. It feels like something. It compels the viewer to feel. The current iteration of our product is about feeling. Not about us feeling, but about our users feeling. I believe that this logo does exactly what we want it to do.”

Smssy just doesn’t have the same ring to it as Twitter, and the social network’s early branding decisions have helped pay off big time.