by Mike Stenger 9 years ago6 months ago

Google+ finally started rolling out vanity URLs on October 29 to all users as long as you meet certain basic requirements.

An active user since day two of its existence, I was more than an excited to finally get the hookup. Well, that is until this happened: 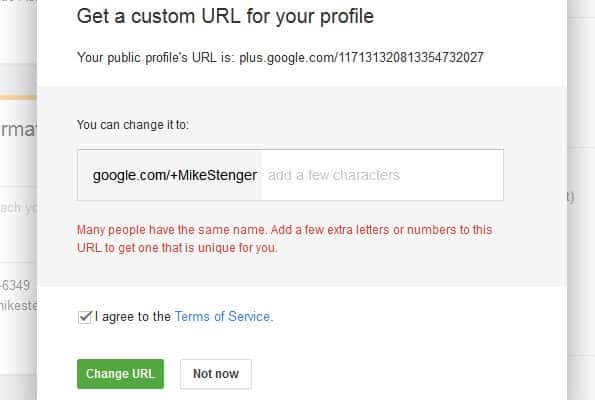 Starting with this latest rollout of vanity URLs to us common folk, Google+ is requiring users to “add a few extra letters or numbers” to their URL. Perfectly understandable if your name is already taken, but incredibly annoying if your name is actually available.

Users have been left with adopting a less than desirable username while Google taunts them like Dennis from Jurassic Park:

However, in this case, there is no magic word. For example, going to Google.com/+MikeStenger takes you to a 404 page:

The URL does not exist because no one has claimed the URL, and according to Google logic, because other people have the same name, no one can have the URL. Of course, if you are higher up the ladder in your industry, that’s a whole other story.

While it’s easy to pull the “popular people get special treatment” card, that’s not entirely the case. One person I circle, Jeff Schultz, has just over 1,300 followers, and was able to get his name as a custom URL.

Being very active and/or verified on Google+ doesn’t seem to be a factor in getting your name either, as great people like Peter McDermott have also been left out: 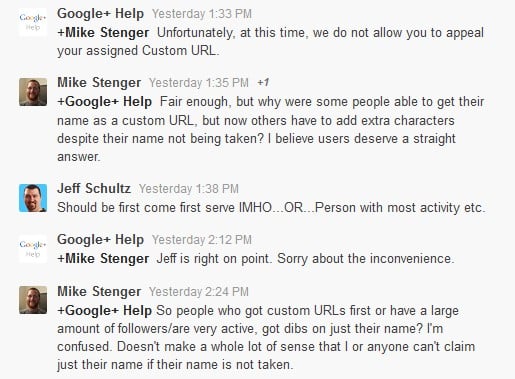 And crickets. Until Google+ specifically comes out and says it, it’s unclear why so many users are seeing custom URLs treated like new passwords. It’s a major oversight, and a system that no other social network has ever implemented because, well, logic.

This is not a matter of giving special treatment. This is a matter of pulling off an incredibly simple feature that enables all users to further extend their identity, an identity that they’ve built on Google+ while millions of others doubted such a social network would even last.

If my name is Biggie Smalls, I don’t want BiggieSmalls47 as a URL when every other social network gave me BiggieSmalls with zero fuss.

In the meantime, if Vic Gundotra or any other Google employees would like to actually clear up this custom URL fiasco, that would be great.

For now, I’ll keep an eye on Google.com/+MikeStenger until some other Google+ user is able to magically claim it, forcing me to plot their early demise.