How [Not] To Conduct Yourself When You’ve Been Catfished On...

What do you do when you realize you’ve been catfished on Facebook?

While the best answer to this question is simply “don’t get catfished,” some people still end up steering into the skid and 10 years later they get to asking themselves “what the hell have I been doing wasting my youth on this lazy dipshit I’ve never met?”

So they put in a call to Nev Schulman and Max Joseph of MTV’s Catfish who show them how to use Google and facilitate a meet.

A meet which usually ends in shame and disappointment.

I’ve seen the show. I’m familiar with the phenomenon. I know how to use Google. This will never happen to me. I am not a moron. But then I was added on Facebook by a beautiful, dirty-lookin’ blonde by the name of Nicole Hearson and, well … I steered into the skid.

This is the story of our short-lived online romance.

When Nicole sent me a friend request I thought “yeah right, this is a totally fake profile, I’m being catfished.” I went for a walk, I stopped by the store, I came home and watched a few episodes of The Office on Netflix, and I had a beer.

I could not stop thinking about Nicole.

I went back to my computer to see if the request was still in my queue, or if I had arrogantly denied her innocent gesture of friendship like the jaded twentysomething I deep-down feared I had become.

So I sent Nicole a simple welcoming message. I actually didn’t fret too much about it, because I don’t really have any reasons to be insecure. After all, I am a moderately successful new media writer who does not need to supplement his income with bartending, and there’s even been talk of opening a savings account around my apartment. I do yoga, and I have a bangin’ bod (more on that later). So a simple “hey” should be enough to keep that flame of attention lit. 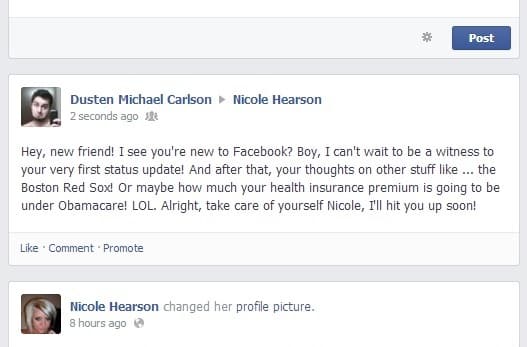 Anyway, I quickly remembered the lessons of MTV’s Catfish.

“HEY!” I shouted to myself. “You’ve seen the show! You’re familiar with the phenomenon! You know how to use Google! You are not a moron!”

What I found was shocking. Absolutely shocking. On this website, this website, and this website (NSFW links) someone had posted a bunch of pictures of Nicole in various states of undress. If you’re at work and reading this, let me save you some time … these are websites of ill-repute. Also, keep your eyes off my fake girlfriend, you sick bastard!

I needed answers, but I didn’t want to overreact when things were going so well with Nicole. So I opted for “caring and concerned.” That’s a good look, right ladies? 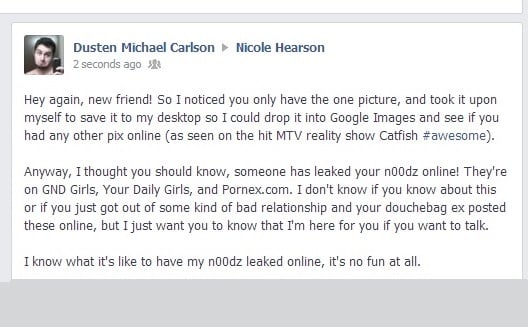 It’s true about my n00dz, btw. You think you can trust your own colleagues …

Part 3: In Which Nicole Is Catfished

So I went back to my Google search, and discovered something even worse than Nicole’s n00dz. Someone else was using her profile picture! This skank, Ashley Thalls (fakest name ever), had the exact same profile picture as Nicole.

Fearing that Nicole’s picture was being used without her permission, I thought I’d do the decent thing as a friend and let her know. 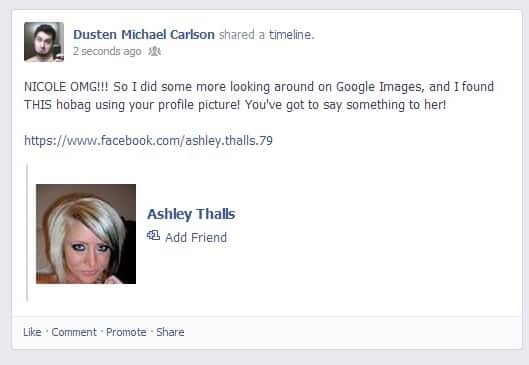 After Nicole took too long to respond to this stunning revelation, I decided to take things into my own hands. Admittedly, I overreacted, but in the interest of journalistic integrity … 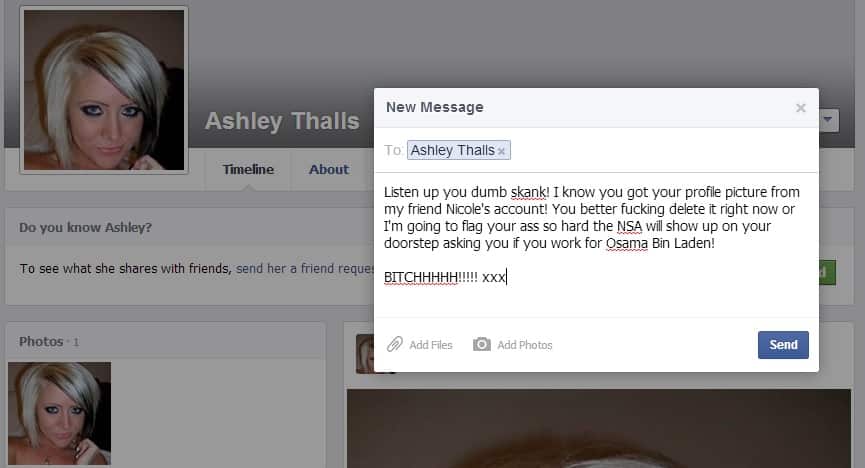 Then I made a rather strange discovery.

Her vanity url didn’t match her name as given on her profile. So far as I know, while you can change anything on your profile (including your name), your vanirty url, once chosen, is for keeps.

Did my Nicole used to go by the name “Sheryl Plowman?” If so, why?

Instead of trying to figure it out behind her back, I figured the right thing to do was to go to Nicole and just air it out. 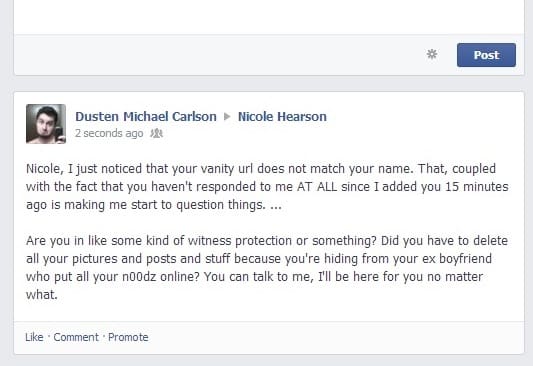 And as soon as I hit “Post” I immediately feared that I had scared her away with the truth. It was a perfectly rational explanation, right?

But up until this point, Nicole hadn’t responded back to me at all. Were my sharp instincts, deductive skills, and basic knowledge of Google my undoing? Had I flown too close to the sun only to burn, never to speak to this mystery blonde again? Did I reach too far, only to scratch the truth?

And then it hit me. What if I had it all backwards?

What if Ashley Thalls was the real person, and Nicole was the catfish?

Ashley had been online longer. She had 12 more friends than Nicole. It all made sense.

Whether it’s addiction or an emotional disorder that manifests obsessive behavior, none of us are too big that we don’t need help. It’s often said that the first step to getting help is admitting that it’s what you need. And boy, did I need help. I had lost myself in Nicole/Ashley or Ashley/Nicole. I had lost touch with all reality. I remembered “Hey, I’m actually happily married.”

Reality set in. I needed help. I said the words.

So I went to get it. 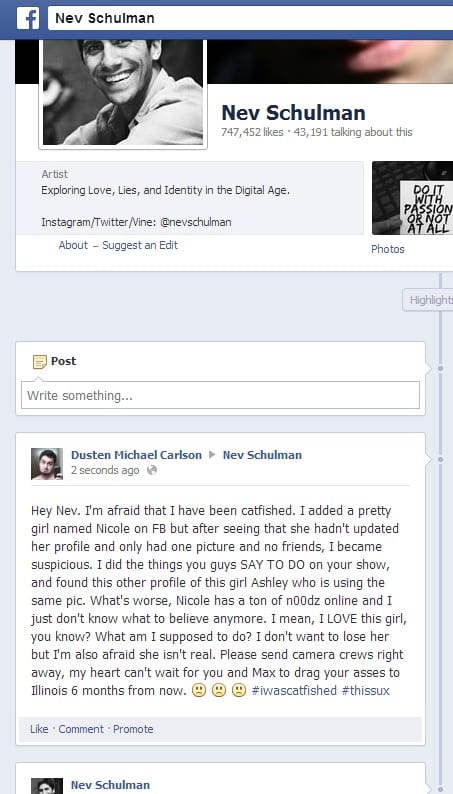 And I felt no shame.

If you’ve been catfished on Facebook, you can do the same here. There’s no shame in it, friend.