Home Depot Racist Tweet Apology Arrives As Outside Agency Gets...

The Home Depot racist tweet controversy has led to an apology from the home improvement retailer.

The original tweet featured two African-American drummers alongside a person in a gorilla mask along with the caption: “Which drummer is not like the others?” 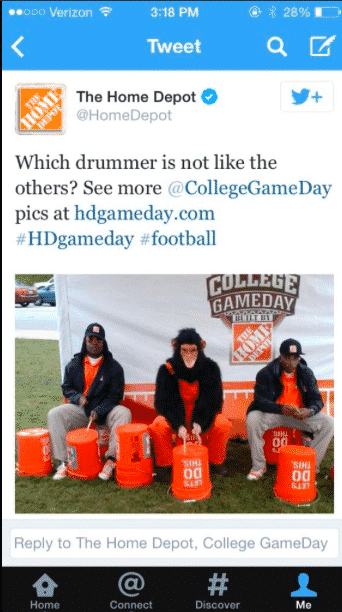 Following the Home Depot racist tweet debacle the company issued an apology and fired the outside agency responsible for running its social media campaigns.

In the apology company spokesman Stephen Holmes writes, “We have zero tolerance for anything so stupid and offensive.”

Holmes also reveals that Home Depot is now “closely” reviewing all of its social media policies to determine “how this could have happened, and how to ensure it never happens again.”

Sending out offensive and off-color tweets seems to be a popular theme for 2013. In September AT&T apologized after using September 11 to promote its services. KitchenAid last year was forced to apologize when an employee posted a comment about President Obama’s grandmother after she passed away.

The Home Depot racist tweet debacle has one thing in common with the other major social controversies, someone was fired and the company’s response was less than stellar.

If you haven’t been following the racist tweet controversy you can catch up here:

Do you think the Home Depot racist tweet apology suffices or should the company take a stronger position against what occurred?