Home Depot has fired a social representative after an awkward, racially insensitive tweet was posted to their Twitter feed — and many followers expressed their disgust via the service.

The seemingly racist Home Depot tweet was thought by many to be a fake or misfire, but it appears the image was genuinely sent by whoever was managing the brand’s social media accounts.

BuzzFeed chronicled the Twitter aftermath of Home Depot’s racist tweet scandal, which in part involved individually apologizing to all who tweeted about the original image, above. The mass apology from the official Home Depot feed created a string of sheepish postings: 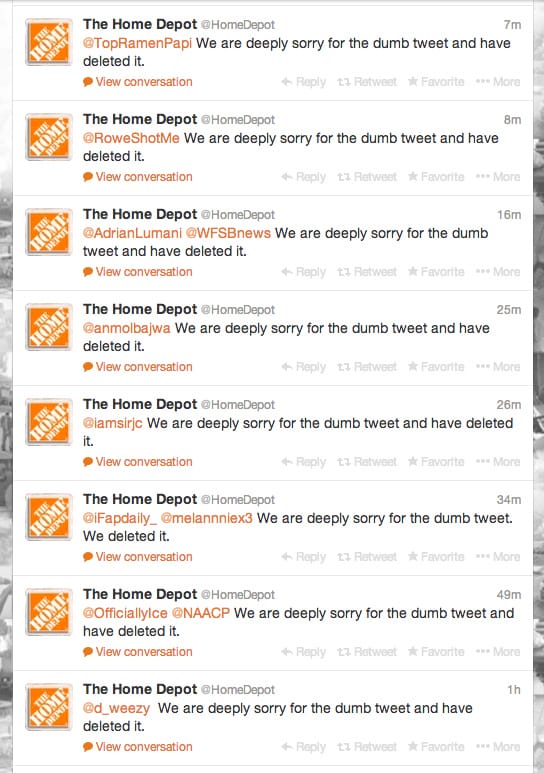 Perhaps even more awkwardly, the brand also apologized to Jesse Jackson, Al Sharpton, and the NAACP — none of whom had, at the time, mentioned the Twitter scandal involving Home Depot:

@Ursula_Rochon @TheRevAl @RevJJackson @HomeDepot We are deeply sorry for the dumb tweet. We deleted it.

According to Home Depot, the racist tweet scandal was down to an outside agency handling the brand’s Twitter account, and the latest update from the company reads:

We have zero tolerance for anything so stupid and offensive. Deeply sorry. We terminated agency and individual who posted it.

It’s not clear which agency was responsible for the Home Depot Twitter debacle, nor what the actual intent behind the now deleted tweet seen in the screenshot above may have been.