Digg was once in its prime, boasting millions of monthly unique visitors, but a string of bad decisions had users leaving the social bookmarking service in droves.

While many have written off Digg, according to Marketing Land Editor-In-Chief Matt McGee, it helped drive around 3x more traffic than any other social network.

Matt owns Glass Almanac which covers Google Glass, and recently wrote a story about a Californian woman who received a ticket for wearing Glass.

In a matter of hours, Matt’s article was picked up by CNN, The New York Times and was shared thousands of times on social media.

After diving into the analytics, one result surprised him: 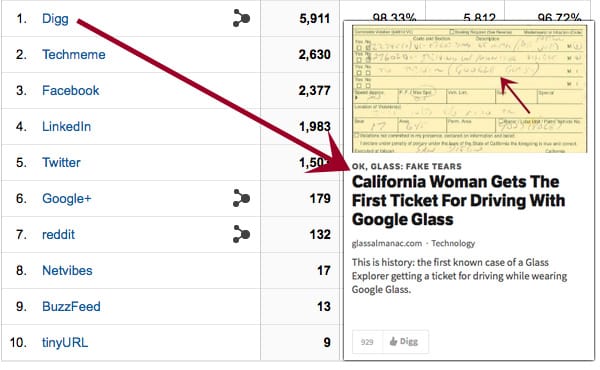 “It’s not just this one instance, either. Our own analytics show that Digg is the No. 7 social referral source for Marketing Land so far in 2013, ahead of sites like Reddit and StumbleUpon.”

Does this mean everyone and their mother should start using the site again? Absolutely not. This is only one set of data, and based around technology where Digg’s focus has always been.

However, it’s an important reminder that just because you don’t use something like Digg anymore, does not mean it’s no longer a valuable platform.