The Facebook social graph is able to predict with a great level of certainty who you are currently dating, sleeping with, and more.

A new study published by Facebook and Cornell University suggests that the social network can determine with about 50 percent accuracy who you are in a relationship with at any given time. If the subject is married that figure raises to 60 percent.

It’s easy to assume that Facebook would simply look at a persons profile and see how many friends two people have in common. However, that method is only accurate 24.7 percent of the time, likely because people break up but retain similar friends lists.

Instead, Facebook and Cornell University officials use a process called “dispersion.” Basically, they examine who shares the largest number of networks with a user. Basically they attempt to figure out who knows the most people spread across a broad range of different interests.

Basically it isn’t just about your friends but also your significant other meeting your family, people from your past, co-workers, and other connections.

As we reported yesterday Facebook already knows if you will get divorce, possibly before you realize it. With that being said we aren’t surprised that Mark Zuckerberg can sit around analyzing your relationship for his own amusement. 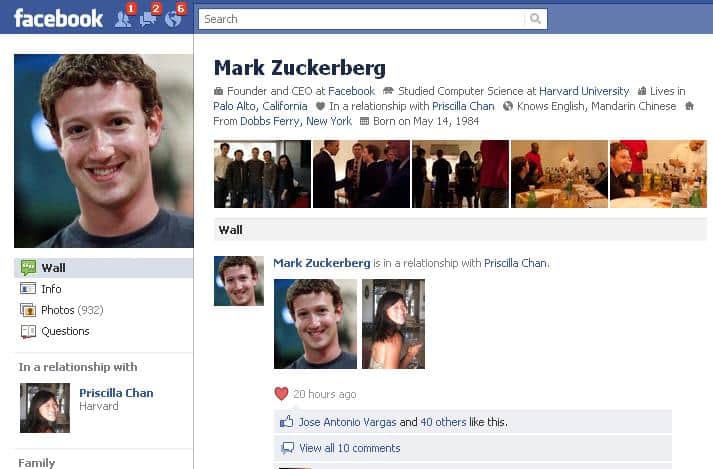 Understanding relationships could help Facebook target users for specific ads. Imaging targeting a person for Chicago Bears tickets because their boyfriend is a huge Bears fan? Or selling plane tickets to a guy because his anniversary is coming up and his girlfriend keeps talking about her dream trip to Barcelona.

Facebook can also determine how likely you are to break up with your significant other based on various activities between you and your partner on the social network.