A teacher’s racist Facebook post in which he not only stereotypes black teens — but also uses the n-word — is not only a situation in which we don’t really feel bad about a possible Facebook firing … it’s also a reminder that the social network indeed intersects with real life sometimes, for better or worse.

The Ohio teacher’s horrible post is one of those instance in which you really don’t feel like it was an unfair privacy violation so much as a useful bit of knowledge about a person to whom young people are exposed and whose futures are to a small degree entrusted. But the way in which it became nationally newsworthy is also a lesson in the permanence of social media content when we espouse a cruel, unkind, or position we’d otherwise not state in polite company.

This Facebook career tanking isn’t shocking so much in that the content came back to bite the teacher, but it is when considering the guy involved didn’t consider that openly airing his racist views — something he presumably didn’t do in class or the staff break room — would have implications for his job.

Stranger still is how he initially handled it. The teacher in question is David Spondike, who teaches at a school in Akron that is mostly black.

“I don’t mind if you come to my neighborhood from the ghetto to trick-or-treat. But when you whip out your teeny dicks and piss on the telephone pole in front of my yard and a bunch of preschoolers and toddlers, you can take your nigger-ass back where it came from. I don’t have anything against anyone of any color, but niggers, stay out!”

Later, Spondike clarified to say he was not the sort to hide his views, adding:

“There is a screen shot of a post floating around that is being used claim I am a racist. My position on race and racism has been posted and discussed here on many occasions and is exemplified on a daily basis in my life. I have always been clear and have never minced words on this issue. I have always confronted it head on and never behind peoples’ backs. Please do not expect me to be anything less than consistent today.” 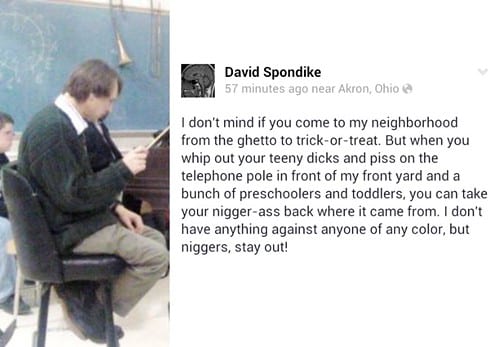 Finally, he defended his position to explain it was based on one incident allegedly involving a single black teenager in the past:

“1. The post contains the “n-word”.
2. I sincerely apologize to those who are sincerely offended by the post; it was promptly removed.
3. I am not going to say that “someone hacked my Facebook page”, like most people do.
4. “Racism” implies prejudging, which is clearly not what happened here.
5. Making any excuse for allowing one race to use a word and condemning another race for using the same word is institutionalized racism in and of itself, regardless of the justification used.
6. The incident surrounds the criminal behavior described below, where a teenager exposed himself in front of young children, urinating on a telephone pole in broad daylight during trick-or-treating.”

Spondike has been suspended after the teacher’s racist Facebook post went viral — and we don’t feel bad reminding you that if you wouldn’t be horrible and ignorant in front of your co-workers at work, doing so on social sites is not that bright, either.