That giraffe riddle game you’ve been seeing on Facebook this week? It’s actually a shakedown. The Internet hactivist group known as Anonymous designed it in order to gain access to your accounts!

You know, when I say that out loud it does sound ridiculous.

For the ten people who don’t know what I’m talking about, you can read our post on the giraffe riddle game here. But the basic gist is this: You’re asked to solve a riddle and if you can’t, you have to change your profile picture to a photo of a giraffe.

Some reports even claim that the giraffe photo allows hackers to wipe out your bank accounts and hard drives.

If by “sources” and “reports,” publications mean “a dubious chain Facebook post of unknown origin,” then by all means, be terrified by the might of Anonymous when you see this shared on your timeline:

“Whoah! Just found out that the Giraffe challenge was set up by the hacking group Anonymous. Apparently they’re going to embark on a random ‘cleansing’rogram which will wipe out the bank accounts and hard drives of those people who have giraffe profile pics … A few of my mates already had it happen, so glad I cheated now!”

Of course, Anonymous is well-known for its mischief and its hackers have done some real damage on a case by case basis. But their anger is often taken out on a body of perceived corruption. We can argue about whether that anger is righteous or not, but you’d be hard-pressed to find an example of Anonymous targeting the bank accounts of the common man. They’ve never done it, and to say the least, it would be extremely out of character for them to do so now.

They have targeted and doxxed individuals before, but again it’s a question of perceived corruption. I’ve theorized in previous posts that they over-target (i.e. they act like actual trolls) only when they are bored and without a “cause” of some kind.

And right now they pretty much have their hands full with united fronts against the NSA and the Syrian Electronic Army.

It is possible that cyber-criminals are attempting to leverage Anonymous’ name to intimidate users (it has been done before), but even still, there isn’t a single confirmed report that the giraffe riddle game has actually “cleansed” a user’s hard drive, wiped out their bank accounts or hijacked their Facebook profile.

Softpedia and Hoax-Slayer have also debunked the Facebook giraffe riddle virus rumor. One of my sources told me that while it’s technically possible, it’s not likely that Anonymous is involved. The source chalked the virus rumor up to people being trolled, reasoning that viral memes and trends often “take on a life of their own.” 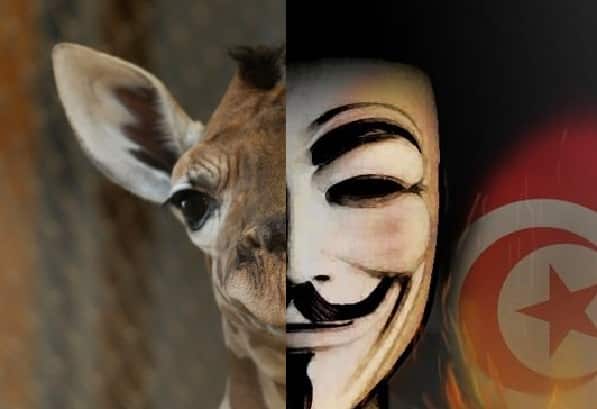