Buzzfeed Minus GIFs: The Tumblr That Destroys Your Favorite Website

Everybody loves Buzzfeed. We wouldn’t quite call them competition (we almost do completely different stuffs), but even if we did, there’s no denying that something about their content just works.

But what if Buzzfeed was missing one, simple thing?

Perhaps as some sort of mild, passive-aggressive protest, Cracked columnist Cody Johnston decided to start a Tumblr dedicated to stripping GIFs out of Buzzfeed articles. The result is astounding. The simple removal of one seemingly mundane element completely neuters Buzzfeed content. It’s sad. 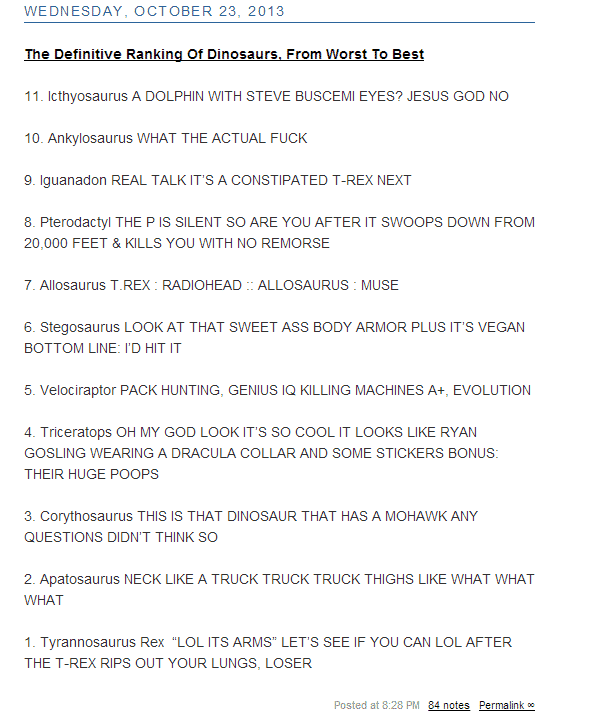 We’re not entirely sure what inspired Johnston to create the Tumblr (aside from that he loves Buzzfeed but “couldn’t stand those pesky GIFs getting in the way”) but I can’t help but think there’s something here whether it’s supposed to be or not.

Cracked and Buzzfeed could be viewed as competitors for the same demographic, and if Alexa is anything to go by, Buzzfeed catches a lot more fish. However, you could argue that while Cracked might be a little more niche, its content is quite a bit more sophisticated than Buzzfeed’s.

And that’s not necessarily a knock at Buzzfeed. Their content is perfectly okay. It works, and there’s a huge audience for it. But in terms of the integrity of the writing medium, it’s pretty obvious that Cracked puts quite a bit more elbow grease into their offerings.

So, is Johnston’s Buzzfeed minus GIFs Tumblr a dry, clever, passive-aggressive protest of Buzzfeed’s content? I wouldn’t put it past him. I don’t know him personally, but this is the guy who has arguably invested the most energy out of anyone ever trying to figure out LOST.