Obamacare Will Force ‘Mark Of The Beast’ Microchips On You...

Apparently, there’s a conspiracy floating around Facebook that Obamacare will require the installation of a microchip of sinister design and purpose in every American. Some reward for braving the onerous signup process, don’t you think?

Of course it’s not true, and the viral post claiming it to be so is as sketchy and unfounded as anything we’ve debunked in the past.

As you see there (screencap provided by this true patriot), this is your standard “grab a scary photo, provide no links, and make sure you mention the NWO” viral post. It has been shared an alarming 355,000 times, and though the post lost most observers at “New World Order,” there are plenty of comments from people freaking the fark out about the Mark of the O-Beast.

No, seriously. Biblical end times is pretty much the theme here. 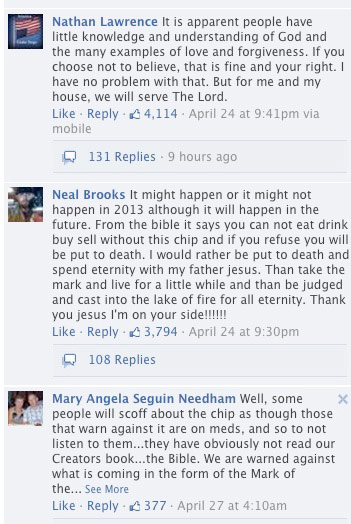 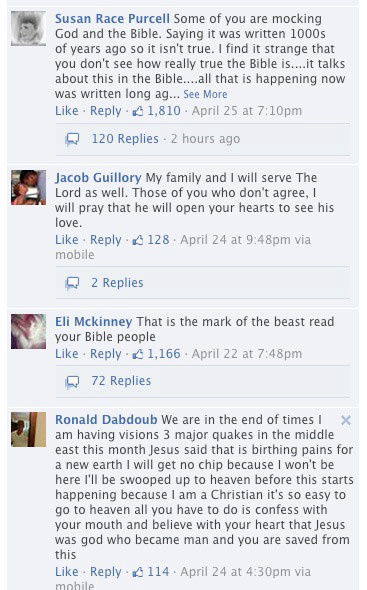 The post is rumored to have originated at the Facebook page “Police State USA: Land of the Checkpoints,” which actually makes perfect sense considering the page’s content. But I couldn’t find it there, so they have earned a reprieve for now.

Anyway, let’s take on the claim that Obamacare will force you to accept anything other than mediocre health coverage.

Snopes points out that there have been no shortage of microchip/Mark of the Beast rumors, going all the way back to … well … the invention of the microchip. Additionally, the forced-implantation as related to healthcare reform conspiracy has been alive and well in some incarnation or other since the Clinton administration.

When it comes to the Affordable Care Act, language from early versions of the bill including page annotations are often passed around on such posts (thought not this one), but the problem is two-fold: One, they’re taken out of context, and two, such language didn’t survive the cutting process all bills go through numerous times before they pass (or die).

Also, that language referred to a national registry which would allow the Department of Health and Human Services to collect data about medical devices used in or on patients. You could argue that such language is a little creepy, but again, it’s didn’t make the final cut and it cannot be mistaken to mean forced implantation of an RFID-based device in every American.

(Never mind that RFID identification doesn’t even necessarily need to be forced on you, amirite Comic-Con 2013 attendees?)

By the way, the photo used is actually for a device that measures glucose levels in diabetes patients.

Of course, this reasonable explanation won’t be enough for anyone who stopped at “Snopes.” People like Teresa here: 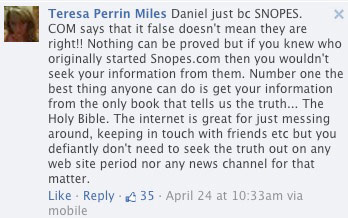 Aww, you got me. I forgot Snopes is owned by George Soros, and is hence a vile, liberal propaganda machine that tricks you into thinking rational thoughts with actual, sourced information. Next time we’ll check InfoWars first.

In any case, please stop freaking out about this Facebook post. If Obamacare was truly a herald of the end times, Satan would have hired a better web designer.

[All the h/t’s here go to John Aravosis]