Normally, we like to recap notable AMAs and were willing to do the same (snark-free, even) for Coulter, who is infamous (some might say “hated”) for her ruthless conservative views and often-controversial comments. But we knew this AMA was trouble when we walked in, and indeed, a whole lot went wrong for Coulter pretty quickly.

So instead of singing the greatest hits from Coulter’s AMA, we’ll attempt to explain what went wrong and how this ended up being the worst reddit AMA ever.

Ann Coulter’s reddit AMA was supposed to begin at 12:45pm, but she seemed to have some difficulty logging in. Here’s the proof Coulter submitted precluding her participation:

Regrettably, that only set the tone for what followed. She was apparently unable to sign in under her forum handle “ann_coulter1” making it impossible for her to answer the burning questions of the reddit community (most of which amounted to trolling, but we’ll get to that).

A few commenters wondered if Coulter’s difficulty with the login process was, in fact, purposeful trolling by reddit moderators, perhaps as some sort of rejoinder to her criticism of President Obama’s Healthcare.gov website. This doesn’t seem to be the case, as mods throughout the thread attempted to save the sinking AMA by linking to Coulter’s responses under an alternate forum handle, “AnnCoulter_.”

No. 2 – Ann Coulter Is Downvoted Into Oblivion

Regardless of her access issues, downvoting was a major problem for Ann Coulter.

Many in the reddit community downvoted the AMA to “0” so that it wouldn’t even show up in the IAMA thread, and did the same for her responses. Such users upvoted confrontational questions and snarky responses from the community instead, burying Coulter’s answers so deep in the thread that it’s not even worth looking for them.

Aside from the mods who linked re-directs to her account and attempted to encourage civility, there were a handful of reddit users who tried to keep Coulter’s karma up so that her answers would be visible in the main thread. Despite voicing criticism and even hatred for Coulter and her views, these users wanted the community guidelines respected, and her answers visible.

A couple of suggestions were even submitted in an attempt to resolve the possibility of oblivion downvoting before the next hated AMA guest.

No. 3 – Ann Coulter Takes A Siesta

Coulter eventually decided to bail for a little while, but promised to return. Not before she got in one last dig at Obamacare, though …

I’ll circle back to redditcare at 2pm.

She did ultimately return, but many reddit users weren’t exactly amused by the Obamacare website comparisons and the downvoting continued.

No. 4 – Ann Coulter Actually Answered A Lot Of Questions (Sort Of)

Despite the login and community issues, Coulter actually did engage quite a bit with the reddit community. She answered over 30 questions and seemed to have a pretty good time going back and forth with community members. Still, many regarded her responses as unsatisfactory, even by community standards, justifying the downvoting.

Between the users that genuinely wanted to see such a hated public figure actually debate reddit users and those who had little patience for anything she had to say, the thread folded and went to the hilariously frustrated. 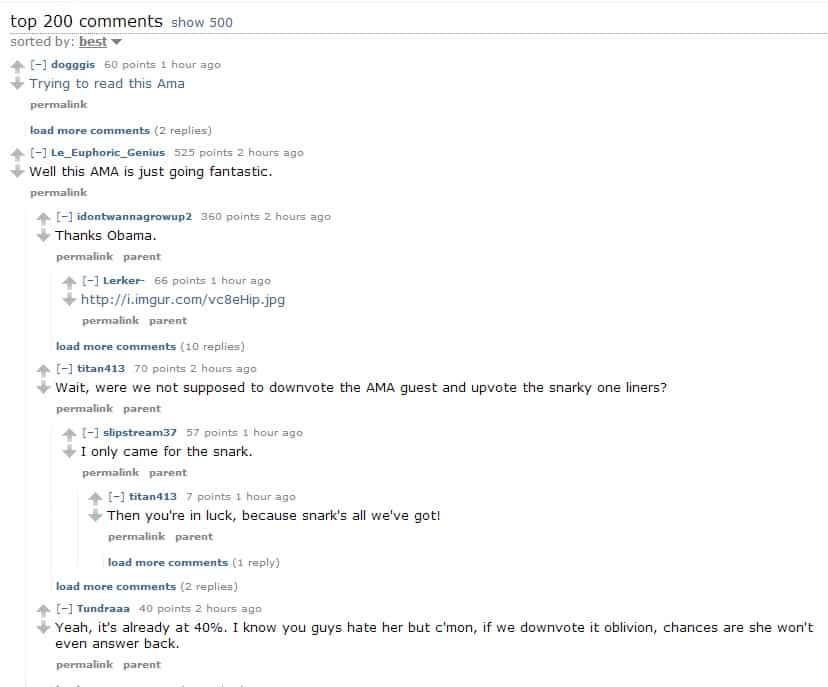 And it’s too bad, too because …

No. 5 – There Were A Lot Of Good Questions I’d Like To See Answered

The appeal of the reddit AMA is thus: It gives anyone willing to go through a 12-second signup for reddit the chance to talk with a celebrity in a laid back community setting. You get to learn a bunch of quirky tidbits and fun trivia about these figures without the media spin.

It’s a chance to have a conversation, and it looks like most redditors took it seriously. They asked some awesome questions that I, personally, would have liked to see answered without having to dig, regardless of the quality of those answers. Questions like:

Conclusion: Shame On You, Downvoters

Don’t misinterpret this as an endorsement of Ann Coulter or her views. That’s not really the point. If you were a gleeful troll in the clusterfuck that was Ann Coulter’s reddit AMA, you should be ashamed of yourself because you let your fellow redditors down. You deprived them of the essential function of the community. That’s why there’s so much baw-ing going on about downvotes in the forum, and that’s why the mods bent over backwards to preserve the AMA.

Who cares if Ann Coulter gave combative non-answers? Let them find their way to the top of the response thread.

Because then anyone who stops by can see what an asshole she was being. Instead, you look like the asshole.

By the way, Ann Coulter said that she’ll come back to the AMA tonight around 8pm. Do better, because you guys are better.