LinkedIn Unveils ‘Most In Demand’ Employers, Google Tops The List

Social recruiting platform Linkedn has revealed its annual list of the most “in demand employers.” The company creates the list by examining “billions of interactions with LinkedIn’s 238 million members.

As expected tech companies continue to reign supreme with Google, Inc. taking the top spot among college and graduate students.

Google not surprisingly took the number one spot. Google’s share price reached over $1,000 this week and the company continues to grow at an amazingly fast pace. The company’s employees enjoy free yoga sessions, free meals, and other valuable perk.

In second place is Apple, Inc. The company is considered the world’s most valuable brand at the moment and it features the world’s largest market cap. It should be noted that Apple has suffered lower than expected sales and less than enthusiastic reviews since Steve Jobs’ passing. However, the company has promised a new line of TV’s and various other devices which has energized its base.

Third place finisher Unilever may surprise some LinkedIn users, however, the company is the largest provider of consumer goods in the world, and it does business in every major country on the planet.

Unilever competitor Procter Gamble finishes fourth on the list despite firing its CEO because of lackluster performance.

Rounding out the top five is Microsoft. Company CEO Steve Ballmer is stepping down as CEO in 2014. Despite being forced out because of performance issues there still seems to be a lot of respect for Microsoft among workers.

Right behind Microsoft is Facebook. While not as valuable as Google, Apple, or Microsoft at this time, the company serves 1.1 billion members and it continues to revolutionize the advertising industry on the desktop and mobile sides of the business spectrum.

Here are the companies that round out LinkedIn companies who are “Most in Demand” among employers. 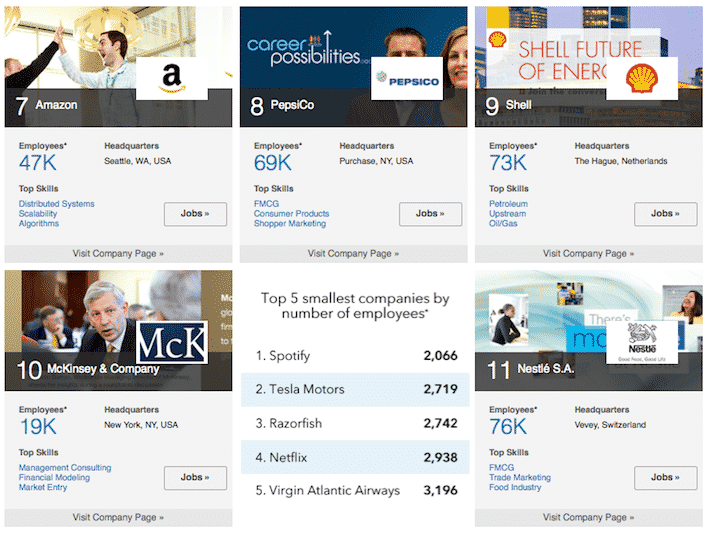 Are you surprised by any of the Top 11 companies on this list?

You can check out full ranking at https://www.linkedin.com/indemand