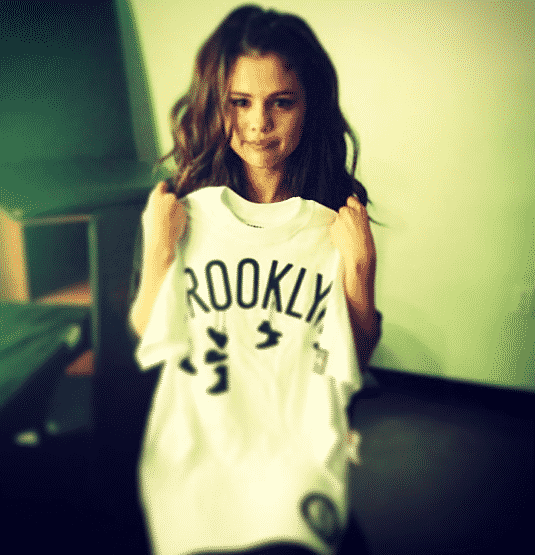 Selena Gomez loves to take pictures with her fans. It’s a ritual she does before every concert and it’s one of the reasons she loves being a singer. So when she couldn’t step outside of the Barclays Center to take some photos she got a little emotional.

Selena broke down in tears during a recent show in Brooklyn. Many people speculated that the singer was crying over her ex-boyfriend Justin Bieber (the incident happened during a song she reportedly wrote about him) but Selena said that she was really crying because she couldn’t take pictures with her fans.

Selena writes on Instagram: “Never ended such a beautiful show in tears because they wouldn’t allow me to Instagram tonight. Completely heart broken and pissed. Thank you SO much Brooklyn. Ill be stoping outside Letterman tomorrow to make it up if you can make it. I love you guys more than you know. Promise.”

Selena kept her promise and took several photos with her fans before her appearance on Letterman. She even titled the first photo “Toldja.”

Are you surprised that Selena Gomez was so worked up after she couldn’t take pictures at the Barclays Center? If you stroll through Selena’s Instagram account you’ll find photo after photo of the singer with her fans.

Recent trends have reported that K-pop fans in the US are getting mixed in with current issues in politics. K-pop fan communities are using online platforms to rally up and protest against racism in the United States. In support of the #BlackLivesMatter movement, the online K-pop community has come together in protest. Never has it… END_OF_DOCUMENT_TOKEN_TO_BE_REPLACED

Just this week, lawmakers approved a bill establishing the District of Columbia (D.C.) as the 51st state of the United States of America. This is after multiple calls and protests from the citizens to finally consider D.C. as a state.  However, the bill is not out of the woods yet as it faces multiple oppositions… END_OF_DOCUMENT_TOKEN_TO_BE_REPLACED

John Bolton’s new book entitled ‘The Room Where it Happened’ had been stirring up quite the attention since it was announced for release last week. Officially released only June 23, the new book seems to threaten the Trump administration as there had been moves to get it unpublished. The request was later on turned down… END_OF_DOCUMENT_TOKEN_TO_BE_REPLACED