Pinterest announced a new widget for Android last week, and according to a new report, its referral traffic grew 66.52 percent from 2012.

LinkedIn also did well with a 34.51 percent increase in referral traffic, and Google+ saw growth of 6.97 percent.

Stumbleupon and Reddit have both experienced double digit declines compared to a year prior, coming in at 27.47 percent and 35.16 percent respectively.

According to Shareaholic, Google+ still has some growing to do:

Although Google+ referred a fair number of visits to online publishers last month (0.04% is a substantial number when we’re looking at a data set of hundreds of millions of visits), it is hardly a leading referral source. Google+ is consistently dwarfed by the competing social media sites. The Daily Muse (via Mashable) notes that there is a lot of conflicting data relating to Google+’s relevance as a social media platform. Our data suggests it probably shouldn’t be a top priority for digital marketers, but — of course — that can change at any moment.

With Pinterest rolling out new Article Pins, its referral traffic could see steady growth as we move into 2014. 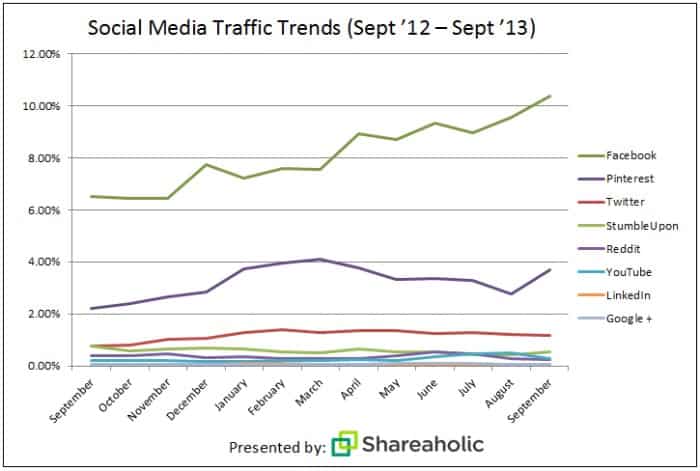