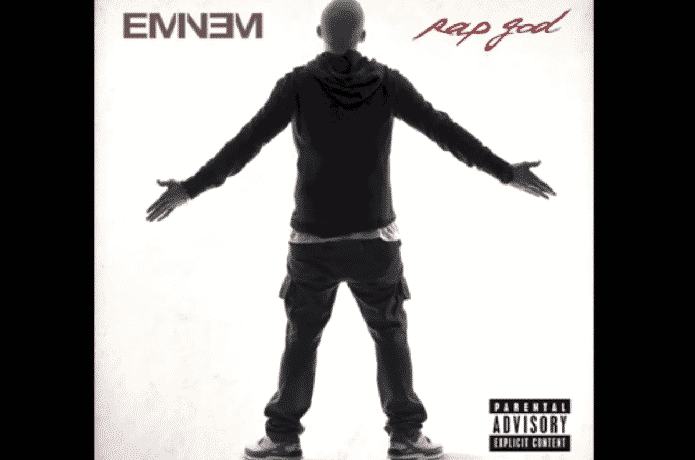 Is Eminem the true rap god? Twitter sure seems to think so. Marshall Mathers released a new single today called “Rap God” and his disciples have been tweeting out their praise all morning.

Kendrick is the conscious. Nas is the mind. Drake is the heart. Kanye is the persona. Cole is the soul but Eminem is #RAPGOD.”

Eminem’s new song comes in at just over 6 minutes long and, according to some dedicate music fan at the Bro Bible, contains 6077 words. That’s about 4 words per second. If that doesn’t impress you, scroll to the 4:13 mark and listen as Eminem starts spitting like Busta Rhymes.

Eminem’s new song has been praised for its lyrical acrobatics. Marshall Mathers hits on everything from misogyny, Norse Gods, hip-hop icons, and alcoholism.

For ANYONE to sit there and act like #rapgod isn’t a lyrical blessing from one of the dopest wordsmiths ever is just based on your own hate.

Jay Z and Kanye West are watching the throne while Eminem is sitting on it. #RapGod

Rap God hit iTunes at midnight last night. It is the third song off of Eminem’s new alum, The Marshall Mathers LP 2, which will hit stores on November 5.

Just this week, lawmakers approved a bill establishing the District of Columbia (D.C.) as the 51st state of the United States of America. This is after multiple calls and protests from the citizens to finally consider D.C. as a state.  However, the bill is not out of the woods yet as it faces multiple oppositions… END_OF_DOCUMENT_TOKEN_TO_BE_REPLACED

John Bolton’s new book entitled ‘The Room Where it Happened’ had been stirring up quite the attention since it was announced for release last week. Officially released only June 23, the new book seems to threaten the Trump administration as there had been moves to get it unpublished. The request was later on turned down… END_OF_DOCUMENT_TOKEN_TO_BE_REPLACED

Learning about the Juneteenth Holiday The Juneteenth holiday, celebrated every 19th of June, is a commemoration of the liberation of enslaved African-Americans in the United States. It was on the 19th of June 1865 when Union Army General Gordon Granger announced General Order No. 3 in Galveston, Texas officially emancipating slaves in the entire state.… END_OF_DOCUMENT_TOKEN_TO_BE_REPLACED